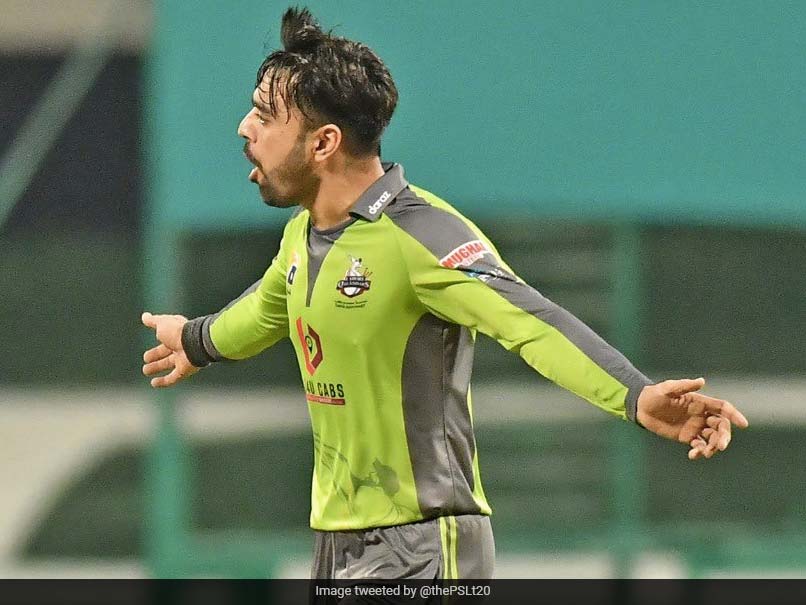 Rashid Khan registered his career-best figures in franchise T20 cricket, taking 5-20 off his four overs as Lahore Qalandars beat Peshawar Zalmi by 10 runs to extend their lead at the top of the Pakistan Super League (PSL) 2021 points table. Rashid ran through Zalmi's middle-order that included big-hitters like David Miller, Rovman Powell, Sherfane Rutherford among others. Shoaib Malik fought a lone battle for his team as his 48-ball 73 went in vain with Zalmi being restricted to 160 for eight in their 20 overs.

Watch the highlights of all the wickets taken by Rashid Khan.

Put into bat, the Qalandars had a nightmare start with Wahab Riaz and Mohammad Irfan causing all sorts of problems for the batsmen. Lahore Qalandars soon found themselves tottering at 25 for four in 7.3 overs.

Ben Dunk and Tim David came to the rescue with a brilliant 81-run partnership to bring their team back from the dead. Dunk was dismissed for a fine 33-ball 48 while David remained unbeaten on 64 off just 36 balls.

James Faulkner produced some late fireworks with a 7-ball 22 cameo to help the Qalandars post 170 for eight.

In reply, Zalmi found themselves on the backfoot straightaway with Faulkner removing both the openers -- Kamran Akmal and Haider Ali -- in the second over.

Malik and Miller steadied the ship with a 51-run stand for the third wicket. Rashid Khan then took centre stage breaking the back of Zalmi's chase with his five-star performance.

Even as mayhem unfolded around him, Malik waged a lone battle to keep his team in the hunt. But Peshawar Zalmi could never recover from the damage done by Rashid and Shoaib's dismissal in the penultimate over proved to be the final nail in the coffin.

Ben Dunk Tim David Cricket
Get the latest updates on ICC Women's Cricket World Cup 2022 and IPL 2022, check out the Schedule , Live Score and IPL Points Table. Like us on Facebook or follow us on Twitter for more sports updates. You can also download the NDTV Cricket app for Android or iOS.