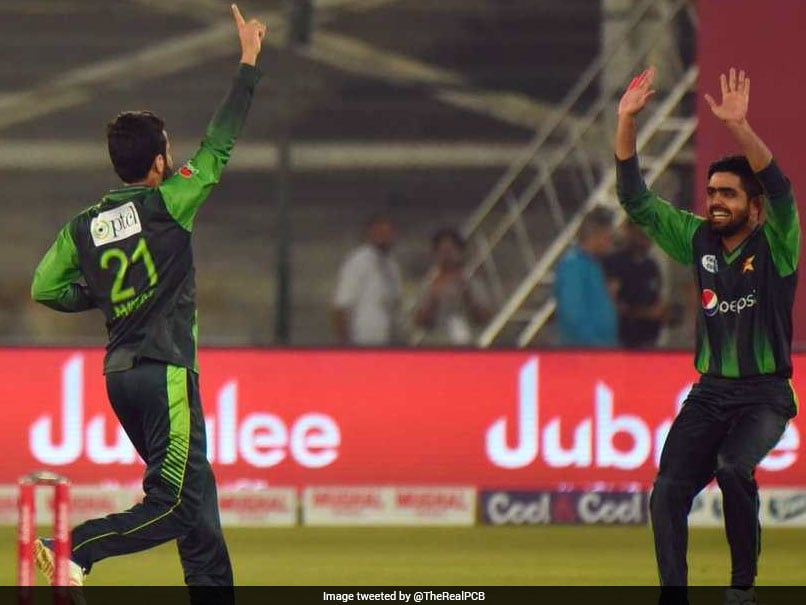 Pakistan won the three-match T20 series in style as they beat West Indies by 82 runs in the second match in Karachi on Monday. West Indies were bowled out for 123 runs in their chase of 206 runs target set by Pakistan. The hosts were rampant in the batting and bowling departments as they outclassed the Windies team to take an unassailable 2-0 lead in the 3-match series. Barring Chadwick Walton, no other visiting batsman crossed the 25-run mark in their chase. Mohammad Amir was the star bowler for the hosts as he ended with figures of 3/22 in his four overs. Shadab Khan (2/23) and Hussain Talat (2/12) took two wickets each to ensure the Windies were bundled out for 123 runs in 19.2 overs. (SCORECARD)

Earlier, Pakistan posted a formidable total of 205/3 in 20 overs in the second T20I against West Indies on Monday. Riding on stellar half-centuries by Babar Azam and Hussain Talat (63), Pakistan ensured they continued their good form after losing Fakhar Zaman (6) early in the second over itself. Babar scored his highest T20I score after remaining unbeaten on 97 runs. He hit 13 fours and one six in his unbeaten knock. Talat was also in fantastic form as he hit his maiden T20I fifty in only 32 balls. Azam, on the other hand, kept on hitting fine boundaries to keep the scoreboard ticking. Talat hit boundaries all over the park but was unlucky to get out courtesy a brilliant catch by Windies skipper Jason Mohammed off Odean Smith's delivery in the 14th over. The next batsman was Asif Ali who continued his fine form from the Pakistan Super League. Samuel Badree dropped Babar in the 16th over on 78 runs. It was an easy catch but the Windies player spilled it over. However, Ali's catch was taken in the 17th over. Asif played a cameo scoring 14 runs off 8 balls hitting one four and a six.

23:30 IST: And its over. Pakistan thrash West Indies by 82 runs. They take an unassailable 2-0 series in the 3-match tournament.

23:09 IST: FOUR!Keemo Paul played a terrific pull shot for a boundary. Back-to-back boundaries for the Windies. 100 up for them.

23:05 IST: The Windies need at least four sixes every over now if they want to stay in the 3-match series. Look impossible now for them.

23:04 IST: OUT! Denesh Ramdindeparts as Windies lose their fourth wicket.Windies 92/4 in 15 overs

22:59 IST:Back-to-back boundaries for the Windies captain.

22:56 IST: FOUR!Lovely shot by Mohammed. This is what the Windies need. A well crafted shot over cover.

22:52 IST: SIX!First maximum for Ramdin. What a massive six. Hammered towards the leg side for a maximum.

22:51 IST: FOUR! Slammed through the offside by Ramdin. A welcome boundary for the visitors. Windies 65/3

22:48 IST:The run-rate is climbing at an alarming rate. Windies need  a magical knock from someone now. Windies 60/3 in 12 overs

22:25 IST: SIX! Over cover.Chadwick is speaking business now. What a fine shot.West Indies 40/1

22:17 IST: FOUR!Thick edge. Samuels gets a boundary. A welcome boundary.

22:00 IST: Mohammad Amirbowls the second over.

21:56 IST: FOUR! A boundary for Chadwick Walton. Opens the face of the bat at the right time. West Indies 4/0

21:56 IST: Chadwick Walton and Andre Fletcherare out in the middle for the Windies chase. Mohammad Nawazbegins the proceedings for the hosts.

21:18 IST: SIX!Asif Ali continues his fine form from the recently-concluded PSL. A maximum over the bowler's head.

21:20 IST:West Indies bowlers were good in the early overs but they gave too much room especially to Babar.

21:06 IST: FOUR!Timing, placement. The shot had got everything on it. A sweet cover drive by Talat. Perfect shot.Pakistan 130/1

20:55 IST:Awful fielding by the Windies players. Giving away free runs to the hosts.

20:50 IST: FOUR!Length delivery and punished by Babar. Fine leg up the circle and the bowler bowls it to the pads.

20:46 IST: FOUR!Third in the over for Babar. Poor fielding by the Windies. Easy picking for Babar. Pakistan 90/1 after 10 overs

20:45 IST: FOUR!Babar Azam opens the face of the bat and guides it to the boundary. Already 10 runs off the first four balls. Pakistan 85/1

20:45 IST: FOUR!Short ball. Talat plays it well over third man. Had enough time to place it as the third man was wide. Pakistan 81/1

20:42 IST: Keemo Paul is mixing it well really nice. Good bowling by the Windies. Unlucky to have hit for a four in the last ball.Pakistan 75/1 in 9 overs

20:34 IST: Odean Smithbowls a good first over. Just allowed the Pakistan batsmen singles. Six runs off the over. Pakistan 69/1 in 8 overs

20:32 IST:A good recovery by Pakistan after losing Fakhar Zaman early in the second over.

20:25 IST: Kesrick Williamsis the new bowler for the Windies.

20:21 IST: FOUR!Delicate, sensible shot played at the side of the wicket. Hussain Talat is taking over the boundaries now.

20:19 IST: FOUR!The third boundary in four balls. A graceful drive by Azam. He looks on fire. Poor bowling by Emrit. 14 runs off the over. Good partnership building up between these two. Pakistan 30/1 in 4 overs

20:18 IST: FOUR!Poor bowling. Two boundaries already in this over. Easy soft ball on the pads and the ball races towards the leg side boundary.

20:17 IST: FOUR!Babar Azam finds the gap and a front foot cut shot for him. He stands and delivers. Wasn't a bad delivery but it was impeccably timed by Azam.

20:12 IST: Samuel Badreebowls the third over for the visitors.

20:08 IST:This is a developing competition between Zaman and Azam. Both batsmen pleasing on the eye.

20:05 IST: Rayad Emritbowls the second over for the Windies. He is very experienced at the domestic level. Opportunity for him to shine with the ball.

20:04 IST: FOUR!Through that point region for a boundary for Fakhar Zaman. Front foot goes right in the pitch of the ball. Sweet timing. Pakistan 7/0 in 1 over

19:53 IST:Pitch looks tailor-made for the batsmen. One can expect a lot of fours and sixes.

19:39 IST: Pakistan have won the toss and decided to bat.

19:18 IST: Hello and welcome to the live updates of the second T20I straight from Karachi.

The visitors just couldn't recover as they lost the plot and it was a mere formality for Pakistan from there in wiping off the innings. Earlier, put in to bat, Fakhar Zaman, Hussain Talat and Sarfraz Ahmed played vital cameos before the country's most experienced T20 campaigner Shoaib Malik's late charge ensured that Pakistan posted 203/5, equalling their highest-ever score in the format. Pakistan now lead the series 1-0 and the second T20I will be played at the same venue on April 2.

Comments
Topics mentioned in this article
West Indies Cricket Team Pakistan Cricket Team Cricket Live Score Live Cricket Score Live Blogs
Get the latest updates on T20 World Cup, check out the T20 World Cup Schedule and Live Score . Like us on Facebook or follow us on Twitter for more sports updates. You can also download the NDTV Cricket app for Android or iOS.