Watch: Shaheen Afridi's Fiery Celebration After Bagging Two Wickets In An Over 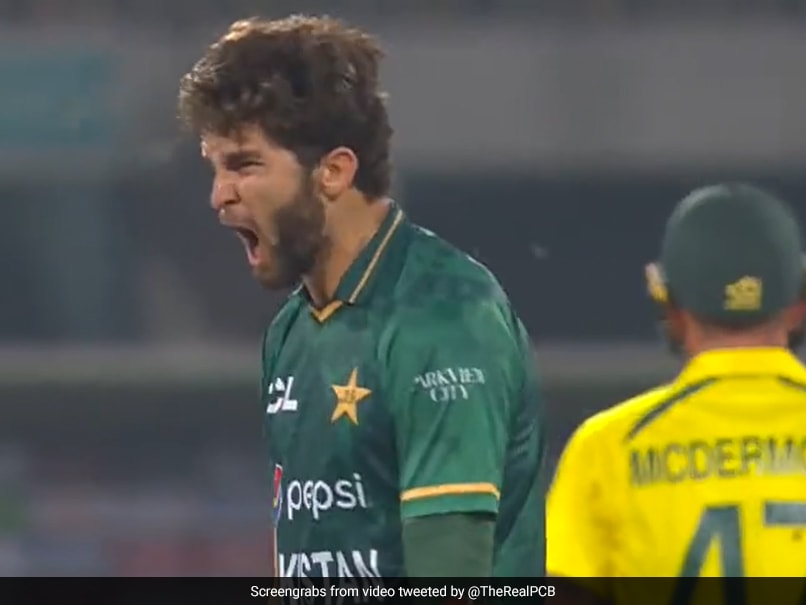 Watch: Shaheen Afridi's fiery celebration after bagging two wickets in an over.© Twitter

Shaheen Afridi once again put on a standout performance for Pakistan but couldn't help his team clinch victory over Australia in the one-off T20I at the Gaddafi Stadium in Lahore on Tuesday. The young pacer took two wickets in the same over, and ended the game with figures of two for 21. In the 18th over of the Australian innings, Shaheen dismissed skipper Aaron Finch for 55, before castling Sean Abbott on fourth ball of the same over. After dismissing Abbott for a golden duck, Shaheen gave a fiery send-off to the player by pumping his fists.

The video was shared by the PCB on their official Twitter handle.

Watch: Shaheen Afridi's fiery celebration after bagging two wickets in an over

In the one-off T20I, Pakistan posted a total of 162 for eight after being put into bat first by the visitors.

Babar Azam top-scored with a 46-ball 66 while Mohammad Rizwan and Khushdil Shah also played cameos of 23 and 24, respectively.

For Australia, Nathan Ellis took four wickets and was the standout performer.

In reply, the visitors chased down the target with five balls to spare.

Apart from Shaheen, Usman Qadir and Mohammad Wasim also picked two wickets each, but the Pakistan bowler were not able to defend their total against the world champions.

After Australia had won the Test series 1-0, Pakistan came from a game down to take the three-match ODI series 2-1.

Aaron Finch Sean Abbott Cricket
Get the latest updates on ICC T20 Worldcup 2022, check out the Schedule and Live Score. Like us on Facebook or follow us on Twitter for more sports updates. You can also download the NDTV Cricket app for Android or iOS.