Chasing an improbable 349 for a win in the second ODI, Imam-ul-Haq and captain Babar Azam hit sensational centuries as Pakistan reached the target with six balls remaining. 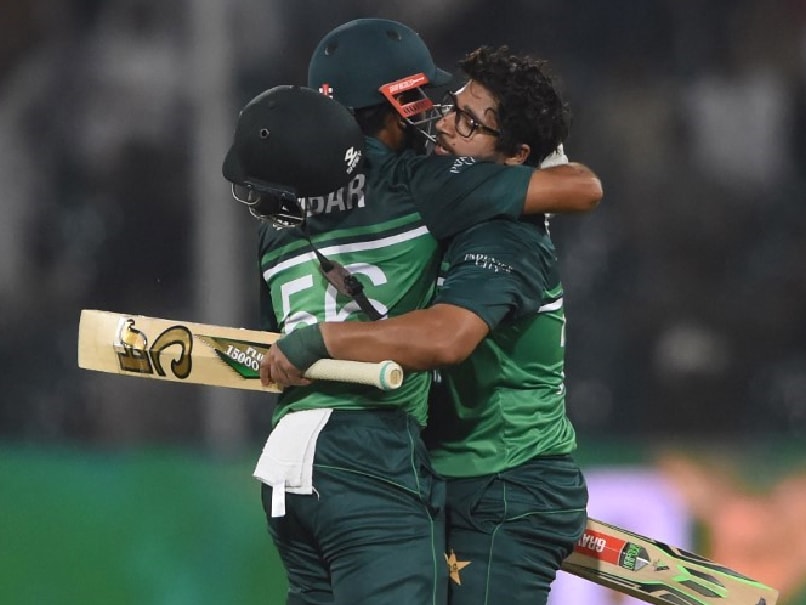 PAK vs AUS: Babar Azam hugs Imam-ul-Haq after the latter completed a century in the 2nd ODI.© AFP

Pakistan produced a stunning batting display to record their highest-ever succesful run-chase in ODIs, beating Australia by six wickets to level the three-match series 1-1. Chasing an improbable 349 for a win in the second ODI, Imam-ul-Haq and captain Babar Azam hit sensational centuries as Pakistan overhauled the target with six balls remaining. Following the win in the second ODI, Pakistan Cricket Board (PCB) shared a video of Babar sharing a stern word with Imam after the latter's dismal in the opening ODI. The video then goes on to show Babar celebrating Imam's century and giving him a big hug.

Incidentally, Imam had hit a century (103) in the first ODI as well, with Pakistan chasing another 314 runs for victory. Pakistan were going well with Imam anchoring the chase from one end, but it all fell apart after the left-hander was dismissed.

Pakistan went on to lose the by 88 runs.

However, nothing of that sort happened in the second ODI despite Pakistan needing to pull off a record chase.

Fakhar Zaman blasted 67 off 64 balls, adding 118 runs for the first wicket with Imam.

Imam then joined hands with his captain Babar, and the duo put on 111 runs for the second wicket to lay the foundations of Pakistan's historic win.

Khushdil Shah finished things off with an unbeaten 27 off 17 balls.

The third and final ODI will be played on Saturday, before Australia's tour of Pakistan culminates with a one-off T20I on April 5, Tuesday, also to be played at the Gadaffi Stadium in Lahore.