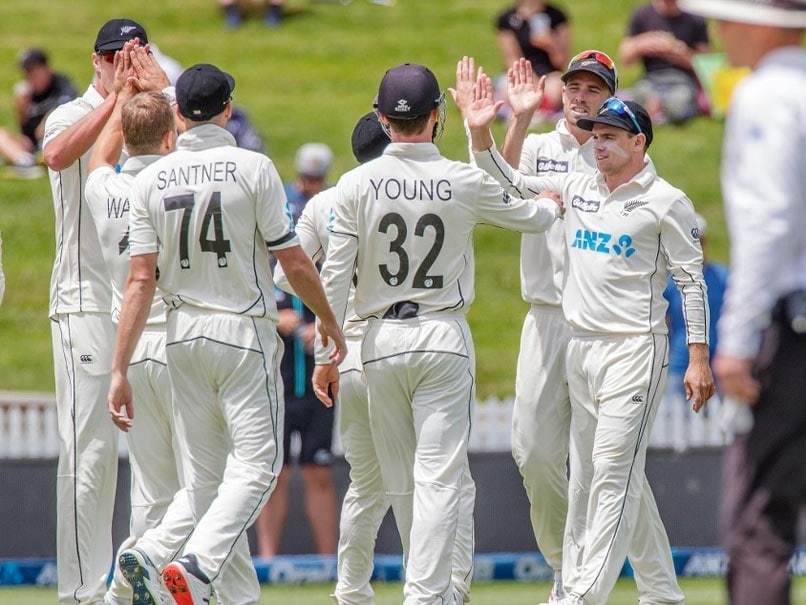 New Zealand stretched their unbeaten run at home to 14 matches with a comprehensive win in the 1st Test.© AFP

New Zealand stretched their unbeaten run at home to 14 matches with a comprehensive win in the first Test against the West Indies in Hamilton on Sunday after ending a battling rearguard century by Jermaine Blackwood. The West Indies were all out before lunch on day four for 247 after making only 138 in their first innings in reply to New Zealand's 519 for seven, giving the hosts a massive innings and 134-run victory. Blackwood was the penultimate wicket to fall, for 104, after a 155-run stand with Alzarri Joseph who made 86. The victory, set up over the first two days when New Zealand captain Kane Williamson crafted a majestic 251, highlighted the difficulty overseas teams have on New Zealand wickets.

The latest victory extended New Zealand's unbeaten home streak to an impressive 14 Tests, a statistic which took Williamson by surprise.

"To be honest, I didn't know that was the case, but it's great. It was a really good performance for us to put together collectively," said Williamson, who deflected all credit away from himself.

"But we're not getting ahead of ourselves. It was nice we were able to put in a strong performance and for us it's about trying to improve little bits at a time in each game."

Although much has been made of New Zealand's green wickets, and in Hamilton it was a lush emerald, Williamson believed it was fair to both sides and the West Indies had first advantage when they won the toss.

But their strike bowlers Kemar Roach and Shannon Gabriel did not bowl full enough to put pressure on the Black Caps, while the West Indies batsmen appeared uneasy trying to reply to the home team's colossal first innings.

"In the initial stages of our innings we just need a little bit more fight in those tough periods and get through.

"Kane showed us exactly how it's supposed to be done, that was a proper Test innings, being patient, buying time."

It left the tourists going into the fourth day on the ropes at 196 for six in their second innings.

Blackwood and Joseph advanced the total to 244 before Kyle Jamieson and Neil Wagner combined to take the final three wickets in the space of 10 deliveries.

Wicketkeeper Shane Dowrich, who injured a hand on the first day, did not bat in either innings.

Wagner, a renowned short-ball exponent, also adapted to the conditions with five of the six wickets he took in the match coming from full-length deliveries.

New Zealand had a chance for a key breakthrough early in the day when Blackwood, on 89, edged a ball straight to Ross Taylor.

But the usually reliable first slip spilt the catch, one of six chances put down by New Zealand.

After battling for 80 minutes on the fourth morning, the end came quickly for the West Indies once Joseph was caught at deep point off Jamieson.

In the following over, Wagner cleaned up the last two wickets of Blackwood and Shannon Gabriel to finish with four for 66 in the innings.

Tim Southee New Zealand vs West Indies, 1st Test Cricket
Get the latest updates on SA vs IND 2021-22, check out the Schedule and Live Score . Like us on Facebook or follow us on Twitter for more sports updates. You can also download the NDTV Cricket app for Android or iOS.