Soon after the controversy surrounding Suryakumar Yadav's dismissal during the T20I series with England, a TV umpire in New Zealand has stirred up another debate. 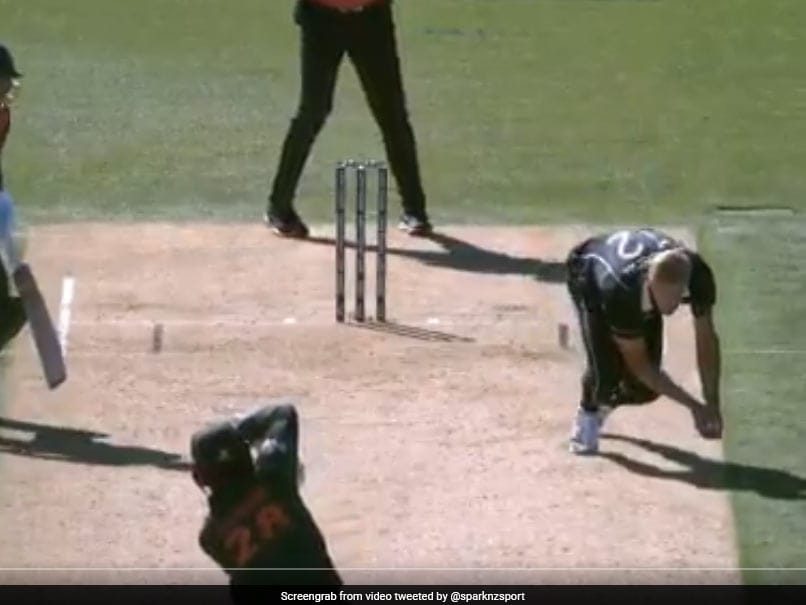 Third umpire deemed that Kyle Jamieson didn't take the catch cleanly and gave the batsman 'not out'.© Twitter

Football has been dogged by controversies since the introduction of the Video Assistant Referee (VAR) with fans and players alike left a bit baffled by some of the decisions being made, especially in England's Premier League. But it seems football is not the only sport facing a problem when it comes to decisions being based on video replays. Cricket too has not been spared. 'Soft signals', 'Umpire's call' and some of the decisions made by third umpires in general across the sport have stirred up controversies. The latest coming in the second ODI between New Zealand vs Bangladesh being played at the Hagley Oval in Christchurch.

On Tuesday, a decision made by the third umpire caused massive controversy and left the bowler Kyle Jamieson and some of his New Zealand teammates shell-shocked.

Bangladesh captain Tamim Iqbal drove a fullish delivery back to the bowler. Jamieson got down really low to complete a wonderful return catch. The on-field umpire called upon the third umpire to see if the catch was taken cleanly, with the 'soft signal' being given as 'out'.

While making the decision, the third umpire is heard saying, "got the ball on the ground, and the player is not fully in control". He went on to overturn the 'soft signal' and gave the batsman 'not out'.

As the 'not out' decision came up on the big screen, Jamieson and some of the other New Zealand players looked around in bewilderment, puzzled by the third umpire's decision.

Kyle Jamieson is adjudged to not have full control of the ball before grounding it in his follow through. Out decision reversed

What do you think? Out or not out? pic.twitter.com/qloGspBpBO

Controversy in New Zealand with this effort from Kyle Jamieson called 'no catch' #NZvBAN pic.twitter.com/XgMeWabC0x

Former New Zealand all-rounder Scott Styris tweeted about the 'no catch' call, saying "I can't remember the last time I've seen something like this given NOT OUT #Crazy".

This happens every game. If the umpires are giving this NOT OUT then be consistent....I can't remember the last time I've seen something like this given NOT OUT #Crazy https://t.co/ymitdRq586

At the time, Tamim Iqbal was batting on 34 with Bangladesh on 53/1. The Bangladesh captain went on score 78 off 108 balls, finally dismissed thanks to Jimmy Neesham's brilliant football skills.

But the real star of the Bangladeshi innings was Mohammad Mithun who blasted 73 off just 57 ball to help his team post 271 for six in their allotted 50 overs.

Tamim Iqbal New Zealand vs Bangladesh, 2nd ODI Cricket
Get the latest updates on ICC Women's Cricket World Cup 2022 and IPL 2022, check out the Schedule , Live Score and IPL Points Table. Like us on Facebook or follow us on Twitter for more sports updates. You can also download the NDTV Cricket app for Android or iOS.