34 Off An Over: New Zealand's Jimmy Neesham Goes Berserk Against Sri Lanka - Watch

Jimmy Neesham blasted five sixes in the 49th over as New Zealand posted 371/7, their seventh highest ODI score of all time. 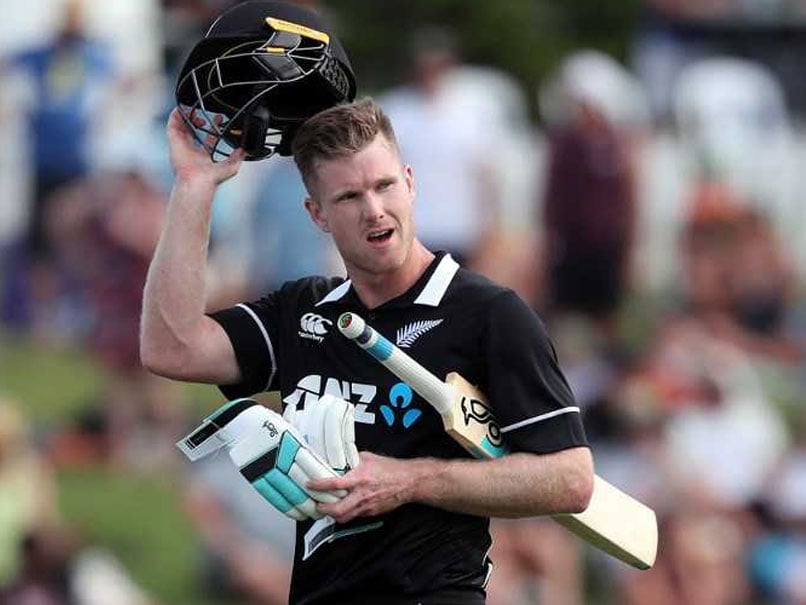 Jimmy Neesham scored 47 off just 13 balls on his return to international cricket.© AFP

Jimmy Neesham made a dream return to international cricket by smashing 34 runs in an over for New Zealand in the first One-day international (ODI) against Sri Lanka at Bay Oval, Mount Maunganui, on Thursday. The Kiwi all-rounder blasted five sixes in Thisara Perera's over en route his 47 not out from 13 balls, which saw the hosts post 371/7, their seventh highest ODI score of all time. The 49th of New Zealand's innings went for 6, 6, 6, 6, 2nb, 6, 1, much to the delight of the crowd.

Neesham's insane power-hitting is now third on the list of most expensive overs ever in the ODIs, behind Herschelle Gibbs' six sixes against the Netherlands and Perera's 35 runs against South Africa, and tied with AB de Villiers' efforts against the Windies.

Neesham, playing his first ODI since June 2017, displayed some clean hitting as he sent the first two balls of Perera's over flying over mid-wicket, before the third went straight back down the ground for six more.

The fourth delivery was also smoked over mid-wicket for a maximum.

The fifth delivery was a waist-high full toss and was called a no-ball, as Neesham took two more.

The free hit was sent to the Bay Oval roof.

Neesham was denied six sixes as Perera finally got it right with a low full toss that went only for a single.

The 28-year old's batting strike rate of 361.53 is the highest for anyone facing more than 10 balls.

Neesham's hitting came after 138 from Martin Guptill, 76 from Kane Williamson, and 54 from Ross Taylor.

Thisara Perera Cricket New Zealand vs Sri Lanka, 1st ODI
Get the latest updates on SA vs IND 2021-22, check out the Schedule and Live Score . Like us on Facebook or follow us on Twitter for more sports updates. You can also download the NDTV Cricket app for Android or iOS.