"Hey You Up There...": Jimmy Neesham Reacts To Another Heartbreaking Loss For New Zealand vs England

Jimmy Neesham came up with a hilarious response to New Zealand's Super Over loss to England in the T20I series decider. 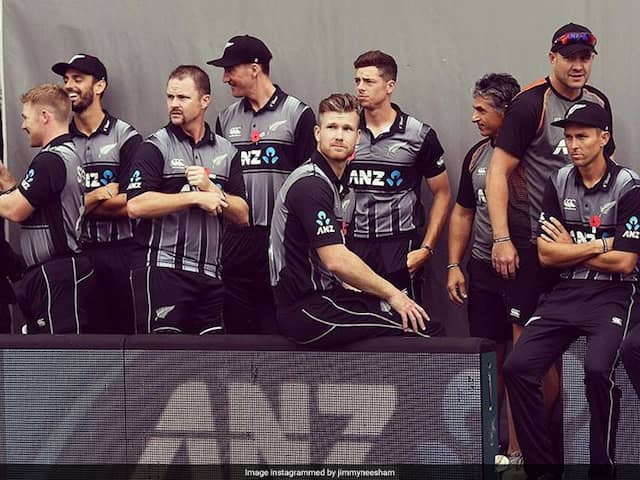 New Zealand lost to England by nine runs in the Super Over in fifth T20I.© Instagram

New Zealand were on the receiving end in a Super Over contest against England as the visitors clinched the five-match series by winning the final Twenty20 International (T20I) by nine runs in the one-over eliminator. Earlier, England needed five runs for the win off the final delivery and Chris Jordan hit Jimmy Neesham for a boundary to send the match into a Super Over to decide the winner. Jimmy Neesham, who was part of the thrilling World Cup 2019 final, took to Instagram to share a picture with teammates. "Hey you up there, any chance you could change the script," Neesham captioned the image on Instagram.

"Hey you up there, any chance you could change the script?"

The fifth T20I was reduced to 11-over per side after rain affected the proceedings in Auckland.

In the match, England won the toss and asked New Zealand to bat first. Martin Guptill and Colin Munro got the hosts off to a flying start. Guptill, in the process, notched his 14th T20I half-century. Colin Munro fell four short of his fifty.

A late flourish from Tim Seifert helped New Zealand post 146 for five in the rain-affected series decider that was reduced to 11-over per side.

England in reply, lost three wickets in three overs but Jonny Bairstow and Sam Curran steadied the ship for England with a 61-run stand.

On the final delivery, England needed five runs to win and Chris Jordan, batting at number nine, hit Jimmy Neesham for a boundary to level the scores and send the contest into the Super Over.

James Neesham Cricket
Get the latest Cricket news, check out the India cricket schedule, Cricket live score . Like us on Facebook or follow us on Twitter for more sports updates. You can also download the NDTV Cricket app for Android or iOS.