Watch: New Zealand Batswoman Dismissed In One Of The Unluckiest Ways Possible

Katie Perkins hit a powerful straight drive but inexplicably ended up being dismissed. 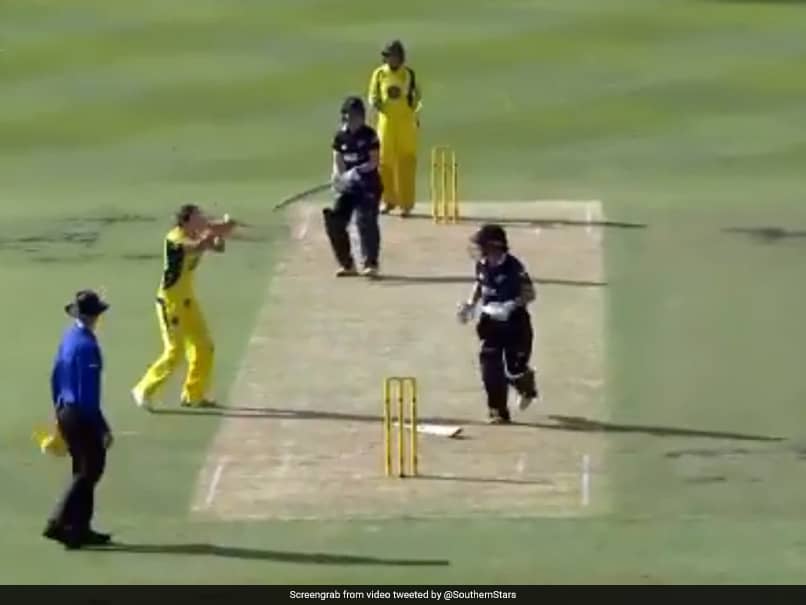 Katie Perkins was dismissed in one of the most bizarre ways.© Twitter

New Zealand woman cricketer Katie Perkins will count herself extremely unlucky after getting out in bizarre fashion during a Tour match against Australia Governor-General's XI in Sydney. With her team in a strong position and non-striker Katey Martin playing a blinder, Perkins hit a brilliant straight drive off the bowling of Heather Graham but inexplicably ended up being dismissed via a caught and bowled. Her powerful drive struck non-striker Martin's bat and ballooned up for an easy return catch for Graham, who just couldn't believe what had transpired.

New Zealand eves were going strong with the score reading 287/3, in the 45th over of their innings when the incident took place.

Here is a clip of the bizarre dismissal:

Oh WOW! Katey Martin helps Heather Graham pick up one of the most bizarre dismissals you'll ever see in the Governor General's XI match! pic.twitter.com/fSV3GJkjyA

The commentators too couldn't believe what they had seen.

"Oh my goodness. That is out! Have you ever seen something like this before?"

New Zealand women's team went on to post a formidable score of 323 for seven with Martin contributing 76 runs off 69 balls. Opener Lauren Down was the top-scorer for New Zealand smashing 107 runs off 134 balls, including 13 fours.

Australia Governor-General's XI's chase never really got going as they lost wickets at regular intervals to be bowled out for a paltry 157 in 38.2 overs.

Anna Peterson was the pick of the New Zealand bowlers, taking three wickets for 28 runs off 6.2 overs. Hannah Rowe and Amelia Kerr too were highly effective with the ball in hand, taking two wickets apiece in New Zealand women's comprehensive 166-run win.