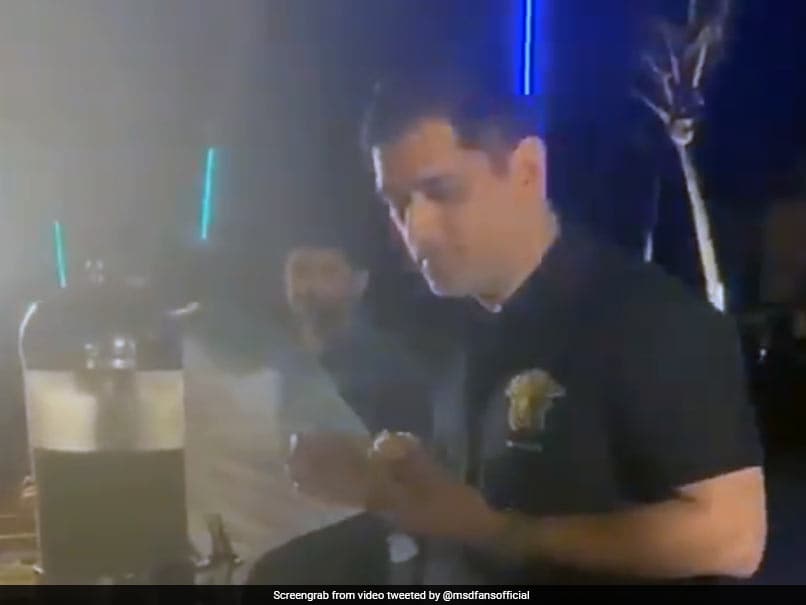 MS Dhoni in his latest appearance on social media was seen serving pani puris to former India teammates RP Singh and Piyush Chawla. In a video shared on Twitter, the former India captain is seen standing near a pani puri stall at an event reportedly in Maldives. In the video, Dhoni is seen standing at the pani puri counter along with a staff member. When the camera pans, RP Singh and Piyush Chawla are seen standing on the other side. Dhoni then takes one puri and fills the stuffing and methodically adds all the ingredients needed to make the famous street snack delicious.

Dhoni then places the pani puri on Singh's plate. The former India pacer, who was recently appointed as a member of BCCI's Cricket Advisory Committee, profusely thanks his former skipper.

Straight outta Maldives, our rockstar is seen making a couple of pani puris!

"Multitailented man mahi," a fan tweeted in response to the video.

"My most favourite things in this world Mahi and pani puri," tweeted another user who was left amused by the video.

"Mahi bhai is feeding pani puri now, but he will feed the bowlers sixers in the IPL," another fan tweeted in Hindi.

The former India skipper has not played international cricket since India made a semi-final exit from the World Cup 2019 in July. He has also been dropped from BCCI's centrally contracted players' list.

However, he has kept social media abuzz with various appearances that are met with great enthusiasm from his huge fan base.

Often his wife Sakshi posts snippets of him on her Instagram, and in a recent video, Dhoni was seen hilariously trolling her by telling the camera that she posts videos of him to try and increase her followers on Instagram.

Piyush Chawla Cricket
Get the latest updates on SA vs IND 2021-22, check out the Schedule and Live Score . Like us on Facebook or follow us on Twitter for more sports updates. You can also download the NDTV Cricket app for Android or iOS.