It was a happy coincidence for MS Dhoni as he was conferred with the prestigious civilian honour on the seventh anniversary of their famous World Cup triumph. 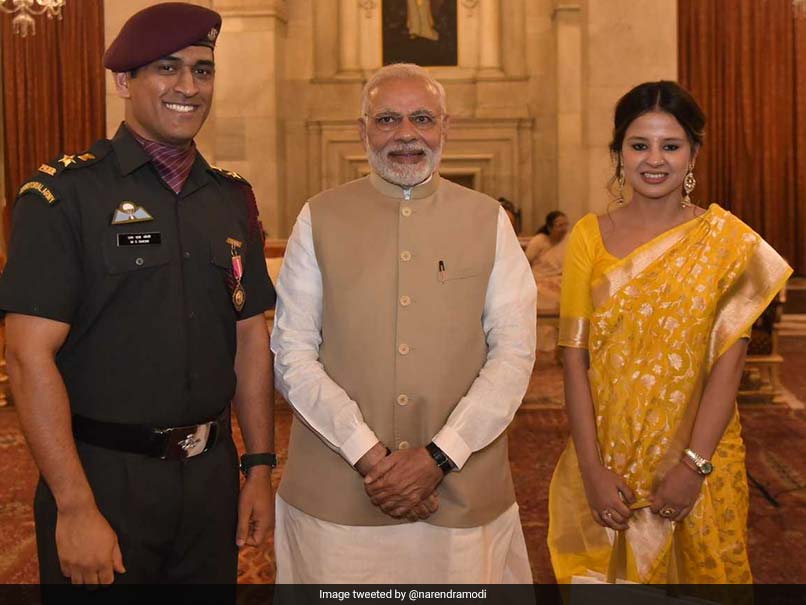 125 crore Indians are proud of the achievements of all those who have been conferred the #PeoplesPadma. Their unique achievements will inspire generations to come. pic.twitter.com/P0NtL8I9e8

Twitterati were quick to react on Dhoni's achievement and posted several comments praising the India cricketer.

Congratulations Lieutenant Colonel MS Dhoni on receiving the Padma Bhushan, 7 years to the date since we won the World Cup ! pic.twitter.com/xjgjrHr4Ng

OnThis Day in 2011, India won the ICC Cricket World Cup for the second time - after a gap of 28 years !! #Dhoni #Dhoni ?? pic.twitter.com/hKbKTWWDcM

It was a happy coincidence for Dhoni as he was conferred with the prestigious civilian honour on the seventh anniversary of their famous World Cup triumph.

As his name was announced, Dhoni marched past the dignitaries present at the Rashtrapati Bhavan before receiving the honour from President Ram Nath Kovind.

A lot like his batting in his heydays, Dhoni looked pretty much at ease as he walked towrds the dais wearing the army uniform.

These are not just pictures, these are special memories. Any idea what they are? Find out more on my app #100MB. #WorldCup2011 https://t.co/jIoKVw6rUp pic.twitter.com/wo83MZjxxg

Dhoni has been the recipient of many awards, including the ICC ODI Player of the Year award in 2008 and 2009 (the first player to win the award twice), the Rajiv Gandhi Khel Ratna award in 2007 and the Padma Shri, India's fourth highest civilian honour in 2009. Considered as the country's most successful cricket captain, Dhoni led India to two World Cup triumphs -- in the inaugural ICC World Twenty20 held in South Africa in September 2007 and the 2011 ICC ODI World Cup. India also won ICC Champions Trophy under him. It was under his captaincy that India climbed to No. 1 in the ICC Test Rankings in December 2009.

In the upcoming Indian Premier League season, the 36-year-old will lead Chennai Super Kings, who have won two titles in 2010 and 2011. The Dhoni-led team also won Champions League in 2010 and 2014.

Just like Dhoni, Advani also has a distinguished career, having won gold twice in Asian Games in 2006 Doha and 2010 Guangzhou. He is also a multiple world-champion.

Comments
Topics mentioned in this article
India Cricket Team MS Dhoni Cricket
Get the latest updates on ICC Women's Cricket World Cup 2022 and IPL 2022, check out the Schedule , Live Score and IPL Points Table. Like us on Facebook or follow us on Twitter for more sports updates. You can also download the NDTV Cricket app for Android or iOS.