While it was unclear what the cause of the charity was, MS Dhoni and Leander Paes were wearing practice jerseys with "Playing for Humanity" written on them. 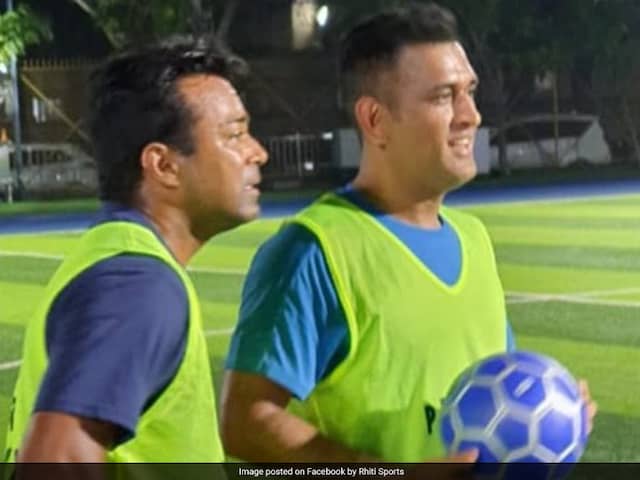 MS Dhoni has been away from cricket for a while now and the former Indian skipper seems to be enjoying his time off the field. MS Dhoni recently participated in a charity football match along with tennis star Leander Paes in Mumbai. Rhiti Sports, the firm which manages Dhoni and several other Indian cricketers, posted pictures of MS Dhoni playing football. While it was unclear what the cause of the charity was, Dhoni and Paes were wearing practice jerseys with "Playing for Humanity" written on them. After the World Cup 2019, Dhoni had made himself unavailable for the India tour of the West Indies as he took a two-month sabbatical from cricket to serve his territorial army unit in Kashmir. After completing his army stint, Dhoni was pictured enjoying a game of billiards at the JSCA International Stadium Complex in his hometown of Ranchi. Before that, the 2011 World Cup winning captain's pictures of driving his newly-bought Jeep Grand Cherokee Trackhawk had also gone viral.

Here are some of the pictures:

Ever since India exited the World Cup 2019, the talks about Dhoni's retirement have been doing rounds, with several former players expressing their opinions in public.

Indian batting great Sunil Gavaskar also had his say on the matter. He expressed that it is time for India to look beyond Dhoni. Gavaskar also said that the veteran wicketkeeper-batsman should leave on his own without being pushed out.

Amidst all of that, Dhoni was recently named the second most admired man in India after Prime Minister Narendra Modi, according to a survey carried out by YouGov. In the list, he surpassed the likes of cricket legend Sachin Tendulkar and India skipper Virat Kohli which clearly shows, amidst all the hullabaloo surrounding his retirement, Dhoni has not seen any dip in his popularity.

After the West Indies tour, Dhoni also didn't feature in the Twenty20 International (T20I) series against South Africa which ended in a 1-1 draw.

India are currently playing a three-Test series against South Africa and have taken 1-0 lead after winning the first Test by 203 runs in Vizag.

The second match of the series will be played at Maharashtra Cricket Association Stadium, Pune, starting October 10, while Dhoni's hometown Ranchi will host the third and the final match, from October 19.