MS Dhoni has made himself unavailable for the tour of the West Indies and had applied for clearance to train with a unit of the Territorial Army. 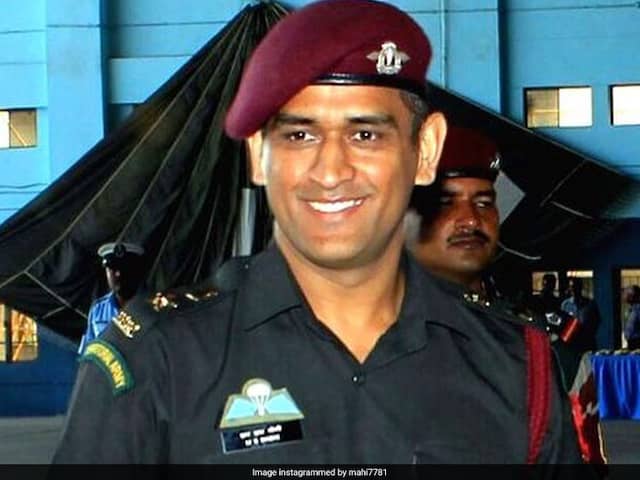 MS Dhoni has taken a sabbatical from cricket for two months.© Instagram

MS Dhoni's request to train for two months with the Territorial Army battalion of the parachute regiment has been approved by the Army Chief, Gen. Bipin Rawat. Dhoni holds the rank of Honorary Lt. Colonel in the Territorial Army. A part of MS Dhoni's training is also expected to take place in the Kashmir Valley. It has also been clarified that the army will not allow Dhoni to play an active part in any operation.

MS Dhoni has taken a sabbatical from cricket for two months.

According to Army sources, Dhoni will undergo training with the jawans and live like any other soldier. Dhoni's battalion, which is headquartered in Bengaluru, is currently posted in the Valley, according to these sources.

In 2015, Dhoni became a qualified paratrooper after having completed five parachute training jumps from Indian Army aircraft at the Agra training camp.

There has been much speculation over Dhoni's retirement after India was knocked out of the Cricket World Cup.

The Board of Control for Cricket in India (BCCI) chairman of selectors MSK Prasad on Sunday clarified that Dhoni isn't hanging up his boots just yet. However Rishabh Pant has been included as the first choice keeper for the squads named for the various series in the West Indies.

Sources have told NDTV that he is expected to turn up for India in the T20s vs New Zealand and South Africa in February 2020 and even play the IPL next year.

MS Dhoni Cricket West Indies vs India 2019
Get the latest updates on IPL 2020, check out the IPL Schedule for 2020 and Indian Premier League (IPL) Cricket live score . Like us on Facebook or follow us on Twitter for more sports updates. You can also download the NDTV Cricket app for Android or iOS.