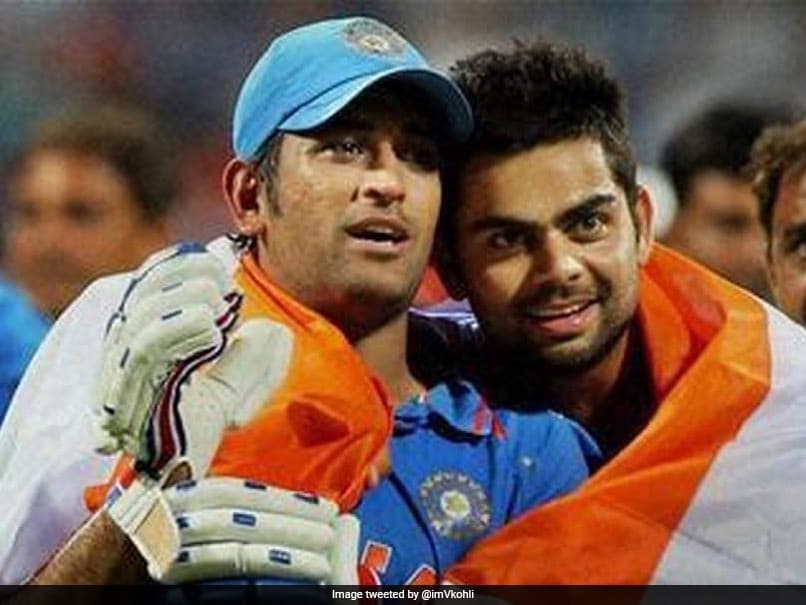 MS Dhoni represented India in over 530 matches across formats during his 16-year-long career.© AFP

MS Dhoni, former India captain, turned 40 on Wednesday and wishes started pouring in from all parts of the country on social media. "Happy birthday skip", wrote India captain Virat Kohli on social media as he posted a picture from the 2011 World Cup final where he is seen with Dhoni. The Board of Control for Cricket in India (BCCI) took to Twitter to wish the former skipper, calling him a "legend and an inspiration". "A legend and an inspiration! Here's wishing former #TeamIndia captain @msdhoni a very happy birthday. #HappyBirthdayDhoni," BCCI tweeted. Former India all-rounder Suresh Raina, who announced his retirement from international cricket on the same day as Dhoni did, tweeted a photo montage of the duo.

Wishing you a wonderful year ahead full of joy and good health. pic.twitter.com/uyeqtBm7UW

A legend and an inspiration!

Wishing you a very happy birthday @msdhoni You have been a friend, brother & a mentor to me, all one could ever ask for. May God bless you with good health & long life! Thank you for being an iconic player & a great leader.#HappyBirthdayDhoni pic.twitter.com/qeLExrMonJ

Super Birthday to Namma #Thala @msdhoni
The one, the only one, now and forever who makes go ! #THA7A #WhistlePodu #Yellove pic.twitter.com/8U9BoJDLrZ

Happy birthday @msdhoni bhai, have a wonderful birthday and an even better year ahead.

India pacer Ishant Sharma, who played most of his international cricket under Dhoni, also wished Dhoni by posting an image with the former skipper.

Mahi Bhai wishing you a very Happy Birthday!! A great friend in a captain!

Hope you have the best day and a great year ahead!! @msdhoni pic.twitter.com/cjflB6hd8N

Former India batsman Mohammad Kaif said while Sourav Ganguly taught youngsters how to win, Dhoni turned that into a habit.

Dada taught us youngsters how to win and Dhoni made it into a habit. Two great leaders from different eras born just a day apart. Happy birthday to the men who shaped Indian cricket.@msdhoni @SGanguly99 pic.twitter.com/l8F7qaPlWr

To my forever love and my greatest friend, happy birthday Mahi bhai Only love for you @msdhoni pic.twitter.com/Fs6BtdWzvR

There's a reason they call him Captain Cool

On his birthday, relive some of MS Dhoni's greatest calls as @BCCI skipper pic.twitter.com/8nK5hvTuWM

It's a feeling that will always ignite when your around me... salute to the legend. Happy birthday Mahi bhai pic.twitter.com/xebk2swwSH

Happy birthday to one of the greatest, an inspiration to many. Have a good one mahi bhai @msdhoni pic.twitter.com/VC0XsAIuhz

Wishing @msdhoni a very joyful birthday. May he experience ever more love and joy and continue to inspire in the times to come.#HappyBirthdayMSDhoni pic.twitter.com/XfFCxW0qDY

Mahendra - meaning Lord of the Sky.
Certainly pleased the skies with his big hitting when he bust onto the scene and then by earning the love of so many people on earth pleased the earth as well. Once in a generation player , #HappyBirthdayMSDhoni pic.twitter.com/COuu9X2s6L

Dhoni, who made his international debut against Bangladesh in 2004, went on to play 538 matches across formats during his 16-year-long career.

Dhoni played 350 One-Day Internationals, 90 Tests and 98 Twenty20 Internationals for India. His last appearance in an international game came in July 2019, when India lost to New Zealand in the semi-final of the World Cup.

On August 15, 2020, Dhoni took to Instagram to announce his retirementfrom international cricket. "Thanks a lot for ur love and support throughout.from 1929 hrs consider me as Retired," Dhoni posted a video on Instagram featuring snippets from his career.

Suresh Raina BCCI Cricket
Get the latest updates on ICC Women's Cricket World Cup 2022 and IPL 2022, check out the Schedule , Live Score and IPL Points Table. Like us on Facebook or follow us on Twitter for more sports updates. You can also download the NDTV Cricket app for Android or iOS.