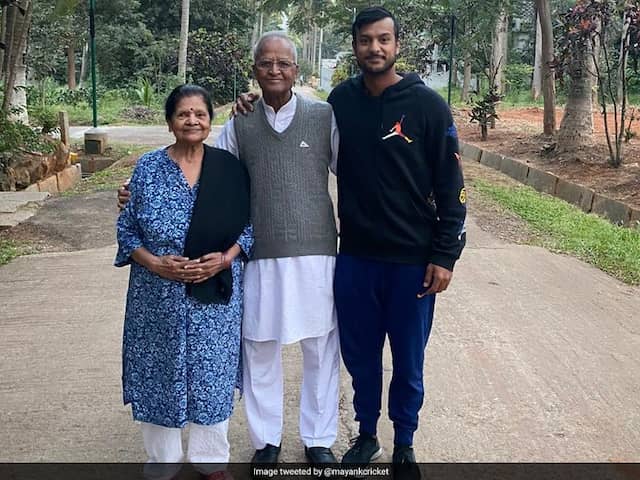 Mayank Agarwal tweeted the pictures with his grandparents with a nostalgic caption.© Twitter

Mayank Agarwal is having the time of his life. From his impressive Test debut in Australia last year, to scoring double-centuries in back-to-back series against South Africa and Bangladesh and entering the top 10 in Test rankings, it would seem like the Karnataka opener can do no wrong. But that has not stopped him from forgetting his roots. He took to Twitter to share photos where he is seen with his grandparents, out on a walk, with a nostalgic caption.

"20 years ago, when we moved into our home, my grandfather took me for this walk. Even today, after I come back from every tour, the tradition continues," he wrote.

20 years ago, when we moved into our home, my grandfather took me for this walk. Even today, after I come back from every tour, the tradition continues. pic.twitter.com/QYQ8HnOLZI

Fans were impressed by Mayank's photos, with many commending him for not forgetting where he came from.

"Lovely! Never forget your roots! One is always a child for his parents /grandparents," tweeted one user.

"Everyone should never forget the root. Go ahead brother. More success to you," another fan wrote.

"That is why you are so dedicated n hard working...All the best...Aim for #1," another user tweeted.

With India's Test openers struggling in the away season in 2018, Agarwal emerged as a reliable option, scoring an impressive 76 on debut in the Boxing Day Test in Melbourne last year.

He scored his first Test century in the opening Test against South Africa earlier in the year, going on to convert it into a double-ton. He followed it up with another century in the next match.

His appetite for big runs was on show again when India took on Bangladesh as he scored a gritty double-century in the first match in Indore.

He will next feature for India when they travel to New Zealand for a two-Test series in February 2020.

Comments
Topics mentioned in this article
Mayank Agarwal Cricket
Get the latest Cricket news, check out the India cricket schedule, Cricket live score . Like us on Facebook or follow us on Twitter for more sports updates. You can also download the NDTV Cricket app for Android or iOS.