Gautam Gambhir and Ishant Sharma were among the players present on the ground when the incident happened. 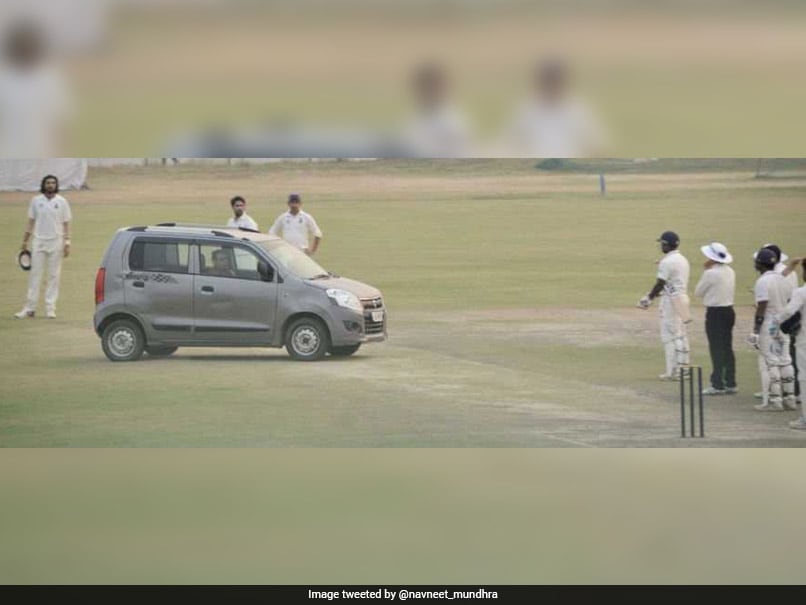 A silver grey Wagon R suddenly drove onto the field of play at the Air Force ground in Palam.© Twitter

It cannot get any more bizarre than this and this probably would be the first such case on a cricket field. On Friday, the Air Force ground in Palam saw a man driving his car onto the pitch in what can be termed as a major security breach during the Ranji Trophy match between Delhi and Uttar Pradesh as players from both the sides along with officials were left dumbfounded. International players like Gautam Gambhir, Ishant Sharma and Rishabh Pant were present on the ground when the incident took place.

A picture has emerged of the incident where Gambhir, Ishant and Manan Sharma were seen standing with the car parked on the centre of the 22-yard strip.

The BCCI will be seeking a report from their affiliated unit Services Sports Control Board (SSCB) about the incident. At around 4:40 pm, 20 minutes from close of play, a silver grey Wagon R suddenly drove onto the field of play with Uttar Pradesh batting in their second innings. The man, who identified himself as Girish Sharma, tried to swerve his car twice on the 22-yard strip before stopping, an eyewitness told PTI.

It was learnt that the main gate of the Air Force ground, which only allows entry of cars after proper checking remained open with security not in position.

This allowed the man free access inside the complex and instead of moving towards the designated parking lot, which is behind the main pavilion, he drove straight towards the field of play, leaving everybody in a state of shock.

The security personnel at the ground swung into action after this and closed the gate in order to stop the man from fleeing.

He was then detained for questioning by the Delhi Police. BCCI acting president CK Khanna told PTI: "The BCCI will enquire into the incident. The relevant department will get in touch with the Services Sports Control Board as this is a matter of serious concern.

"This is a breach of security measure at the Services Sports Control Board (SSCB) ground. Imagine if the man had any sinister motive, then lives of international cricketers could have been in danger," Khanna added.

Delhi team manager Shankar Saini, who was present at the ground said: "Thank God, nothing untoward happened. There was a possibility that it could have been more serious."

The allegedly inebriated man was first detained by the Air Force Police before being handed over to the Delhi Police for interrogation.

However, as per senior Delhi Police official, none of the involved parties lodged a formal complaint against the intruder.

"No formal complaint has been lodged. Preliminary investigations suggest that the Airforce security guard was not present at the gate. We have detained the man identified as Girish for questioning. He is around 30 years old and claimed that he works in a private firm. He seemed mentally disturbed," a senior Delhi Police official told PTI.

A DDCA official present at the ground said: "The man looked a complete mess. He was driving the car wearing a lungi. In fact, when he was being bashed up for his act, he hardly reacted. He did not look in perfect mental health." Although the match is being held at the Services' home ground, the host of this particular match is Delhi & Districts Cricket Association (DDCA).

The Services is only the facilitator as they are providing the ground for the game. The match was supposed to be held at Feroz Shah Kotla but with India's T20 game against New Zealand being held on November 1, the match was shifted to the Airforce ground.

Comments
Topics mentioned in this article
Gautam Gambhir Ishant Sharma Rishabh Pant Cricket
Get the latest updates on ICC T20 Worldcup 2022 and CWG 2022 check out the Schedule, Live Score and Medals Tally. Like us on Facebook or follow us on Twitter for more sports updates. You can also download the NDTV Cricket app for Android or iOS.