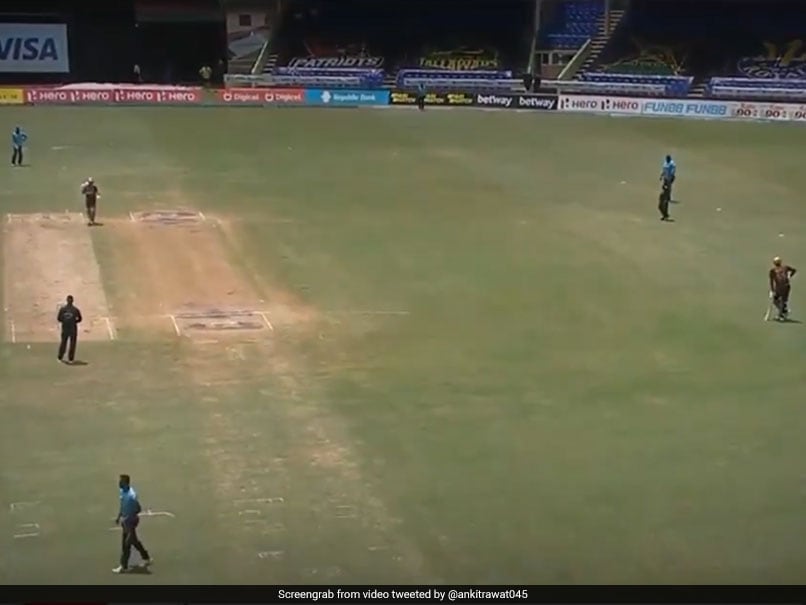 Kieron Pollard stood far away from the umpire as he protested a decision over a wide ball.© Twitter

Kieron Pollard has had his own ways of protesting umpire's decisions while he is on the field. He has been seen taking the field with his mouth taped off on one occasion and standing at the edge of the pitch while taking guard on another during the Indian Premier League. At a Caribbean Premier League match on Tuesday, Pollard, playing for Trinbago Knight Riders, protested the on-field umpire's decision by walking away from his position at the non-striker's end and standing wide of the square, at a position where a conventional short mid-wicket would be.

Pollard's protest was apparently aimed at a delivery from St Lucia Kings' Wahab Riaz to TKR batsman Tim Seifert that was deemed a legal delivery after it pitched wide outside off stump and Seifert had to stretch full-length as he tried to reach for the ball.

Both Seifert and Pollard looked disappointed at the umpire not calling it a wide and Seifert was even seen engaging animatedly with the umpire.

Pollard, however, didn't say a word and just kept walking away from the official until he had maintained a large distance and appeared to have readied himself for the next delivery.

The on-field antics aside, Pollard and Seifert added 78 runs for the fifth wicket as TKR posted 158 for 7 after being put in to bat by St Lucia Kings.

Kieron Pollard Tim Seifert Cricket
Get the latest updates on ICC T20 Worldcup 2022, check out the Schedule and Live Score. Like us on Facebook or follow us on Twitter for more sports updates. You can also download the NDTV Cricket app for Android or iOS.