Introducing Indian cricket to a year called 2013, after 2011 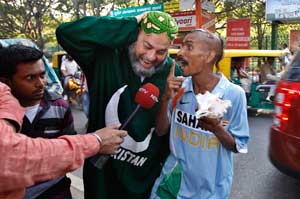 Year 2012 has been marked with darker shades in the Indian cricket calender. For several reasons that have been endlessly deliberated upon, the men in blue and countless more in the stands would much rather look forward to what is in store, in the fresh year.

Of course, having Pakistan at home means the season could not have begun on a more riveting note. For most who said cricket has ended for them with Sachin Tendulkar hanging up his ODI boots, a look - please - at the packed stands! The Delhi match was reportedly sold out in some sort of record time. Surely then, the promotional advertisements on television which paint cricketers as over-confident warriors who only have blood in their eyes, are playing their intended part in keeping the fan-fire burning.

Then again, it has always been an established assumption that it would take a lot more than shameful lack in form, a to-the-moon-and-back string of defeats and legendary retirements to keep fans in India at home when a T20/ODI is being played in their city. Or elsewhere. Tests though will continue to stare at vacant seats much like a hapless coach who has given up on repairing his work and reputation as a maverick. Call it the Fletcher-syndrome or the Rohit-phenomenon - to expect Tests to stage a revival would be fool-hardy.

High stakes though would be on a few other factors. When this year comes to an end, will a certain MS Dhoni continue to be at the helm? If not, then the most important corollary question - will Sakshi Dhoni continue to find shutterbugs. And yes, the bit about Kohli as skipper too. While the topic is on the man at the top, let's not forget the serious issue of the cogs making this wheel trudge -pacers, spinners and Sehwag's alleged tiffs.

Bhuvneshwar Kumar has sprung up into a nation's attention from virtually no where. And no, being known in domestic cricket does not count. He has bowled well against Pakistan and has managed to get the ball to swing and seam. Question though is though rare, others with INDIA on their jerseys have also managed some degree of success in getting the ball to move, only to eventually fade away or fall apart. Kumar will need to keep a level head and look at long-term objectives to truly establish himself.

As for the spinners - the gut prediction is that of a rise of someone from the virtually lonely lanes of Ranji cricket. Yes, there is Ashwin and Ojha. To expect for veterans like Harbhajan and grey-scales like Amit Mishra and Piyush Chawla to re-invent themselves though would be rather optimistic at best.

Shifting focus to the esteemed line-up of batters, Pujara already is Dravid, isn't he? Now it is about finding a Sunil, Sachin, VVS and Sourav. And with many suggesting Sourav as India's next coach, expect bare-chested aggression to make its way back to the top-order.

In conclusion then, the best way perhaps to look at the year ahead would be that it couldn't realistically get any worse. Lost abroad, lost at home, lost greats and lost will to fight (except in promotional advertisements) means 2013 surely will have the Indian team either equaling or bettering its status from a year back. And about Sehwag's alleged tiffs? That was just a ploy to get readers till here. The BCCI has already assured all that all's well. After all, IN BCCI WE TRUST.

Comments
Topics mentioned in this article
Cricket Sachin Ramesh Tendulkar MS Dhoni Harbhajan Singh Sourav Ganguly Bhuvneshwar Kumar RG Sharma Duncan Andrew Gwynne Fletcher
Get the latest updates on ICC T20 Worldcup 2022 and CWG 2022 check out the Schedule, Live Score and Medals Tally. Like us on Facebook or follow us on Twitter for more sports updates. You can also download the NDTV Cricket app for Android or iOS.