AUSW vs INDW: Mithali Raj copped a "big hit" to the helmet off a brutal Ellyse Perry bouncer but she still battled on to reach her 59th ODI half-century. 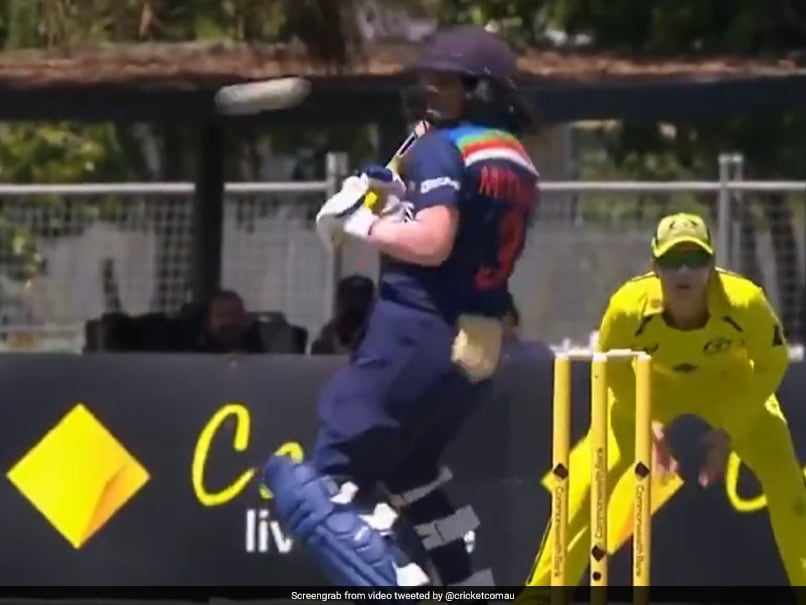 Mithali Raj was struck on the helmet by a brutal bouncer from Ellyse Perry in the 1st ODI.© Twitter

Mithali Raj achieved yet another milestone on Tuesday as she completed 20,000 career runs with a gritty half-century during the 1st ODI between India Women and Australia Women at Harrup Park, Mackay in Queensland. Mithali's knock was crucial to India's cause with most other batters unable to convert their starts. Early on in her innings, the Indian captain copped a "big hit" to the helmet off a ferocious Ellyse Perry bouncer but she battled on, going on to reach a 59th ODI fifty to help India post 225/8 in their 50 overs.

In the 15th over of India's innings with Mithali batting on 11, Perry pitched one short to to the India's batting star. Mithali tried to sway away from the bouncer but it was well-directed and came quickly at her.

Good news - Mithali Raj is good to continue after copping this big hit to the helmet off Ellyse Perry #AUSvIND pic.twitter.com/HH82eDXOAs

Australia won the toss and put India into bat. The Indians got off to a flyer courtesy Shafali Verma and Smriti Mandhana but both fell in quick succession.

Yastika Bhatia and Mithali steadied the ship for India, putting on a 77-run partnership for the third wicket. Yastika fell to Darcie Brown in the 27th over while Deepti Sharma could only manage nine runs before she too was sent packing.

Mithali fought on and notched up another half-century but she was foxed by spinner Sophie Molineux for 61, leaving India in a spot of bother at 166 for five.

Hannah Darlington picked up the next two wickets with India in massive trouble. But cameos from Richa Ghosh (32 not out off 29 balls) and Jhulan Goswami (20 off 24 balls) helped India reach a respectable total of 225.

Australia, though, made a mockery of the chase with openers Rachael Haynes and Alyssa Healy adding 126 runs for the first wicket.

Healy was dismissed for a run-a-ball 77, Haynes smashed an unbeaten 93 while captain Meg Lanning was not out on 53 as the hosts chased down the target in just 41 overs to take a 1-0 lead in the three-match ODI series.

Australia Women Mithali Raj Ellyse Perry Cricket
Get the latest updates on IPL Auction 2023 and check out  IPL 2023 and Live Cricket Score. Like us on Facebook or follow us on Twitter for more sports updates. You can also download the NDTV Cricket app for Android or iOS.