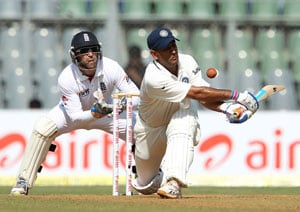 After the high of winning the 2011 World Cup, Indian cricket's fortune dipped that year. In 2012, the dip was rather steep despite a few highlights interspaced here and there.

The world may not have ended in 2012, but for those who have a stake - emotional, financial or otherwise - in Indian cricket's results on the field, it may well have felt like doomsday was near. India played nine Tests, of which six were at home, and still had a ledger that showed only three wins against five losses. Two of those three wins were against New Zealand, ranked eighth in the world.

In One-Day Internationals, the only team India had a winning record against was Sri Lanka. Four wins in the World Twenty20 helped give the team a marginally higher than 50 percent win record, but were not enough to make the semifinal of the event.

The record, of course, gets worse if the second half of 2011 is included, and Test cricket is in focus. India last went through a phase of losing eight (or more) Tests in a row overseas only back in the 1959 to 1968 period.

Which is what made Mahendra Singh Dhoni's statement after the fourth Test against England in Nagpur a little perplexing. The match ended in a draw, giving England a 2-1 series win, and Dhoni said, "It was a tough series, but there are not many things that will come close to the loss in the 2007 50-over World Cup. This is not close to that."

The 2007 ODI World Cup is often compared as a low-point to India's current fortunes. For the period immediately following India's unceremonious exit, it might have seemed to players and fans alike that the end was nigh, but in the overall scheme of things, the 2007 World Cup was sandwiched between otherwise good results for the team.

About the only phase in which the Indian team was abjectly bad was during the tournament proper, losing to both Bangladesh and Sri Lanka in the week between March 17 and March 23 to crash out of the World Cup. It is often forgotten that in the two warm-up matches that preceded India's campaign, the team showed superb form. Netherlands were brushed aside by 182 runs, while West Indies were shot out for 85, with India getting the runs in less than 20 overs for one wicket lost.

The format of the 2007 World Cup also meant that there was very little scope to comeback from a bad day, such as the one India had against Bangladesh. That it was a blip, and not the start of an uncontrollable downhill slide is attested by the results that came after.

The other recent occasions when India has seen lows was in the 1999-2000 season, when they were blanked 3-0 by Australia in Australia and 2-0 by South Africa at home. That, however, was followed by the match-fixing scandal that led to a change of guard and started India off on their excellent run built around a core of all-time great players. And even then, the margins of defeat were not as overwhelming.

Then there was the loss against the unstoppable Australian team in the 2004-05 season, where the greatest team of the past two decades finally realised their collective ambition of a series win in India. Then too, however, the loss was the only one India faced at home for a long while, and while the immediate results after that weren't great, they weren't disastrous either.

Compare that with how things have gone for the Indian team since the start of their England tour in 2011, and the contrast is stark.

In the period book-ended by India's losses to England home and away, the batsmen have scored runs at an average of 29.44, while the bowlers conceded 40.35 runs for every wicket taken. That's over 17 Tests, including nine at home. The difference is massive any way you look at it. In real terms it translates to India conceding over 100 runs on an average as the first innings lead, assuming both sides are all out in their first innings.

In that same period - extended to include the T20Is and ODI till the end of the year - India has scored fewer runs per over than their opponents across 32 ODIs and 16 T20Is on an average.

This, in short, is the kind of dip the team hasn't gone through in a long while.

That said, it's still not all doom and gloom for Indian cricket. The previous lows weren't as extended as this one is because the core group remained largely constant and in form. This particular team is one in transition, and it's to be expected that results on the field will fluctuate until the team settles. The darkest hour, so they say, comes before the dawn. With an Australian team short on experience due to visit soon, the time is ripe for the dawn to break.

Comments
Topics mentioned in this article
Cricket MS Dhoni
Get the latest updates on ICC T20 Worldcup 2022 and CWG 2022 check out the Schedule, Live Score and Medals Tally. Like us on Facebook or follow us on Twitter for more sports updates. You can also download the NDTV Cricket app for Android or iOS.