In the second time in two matches, the perimeter security was breached as fans managed to run into the ground. 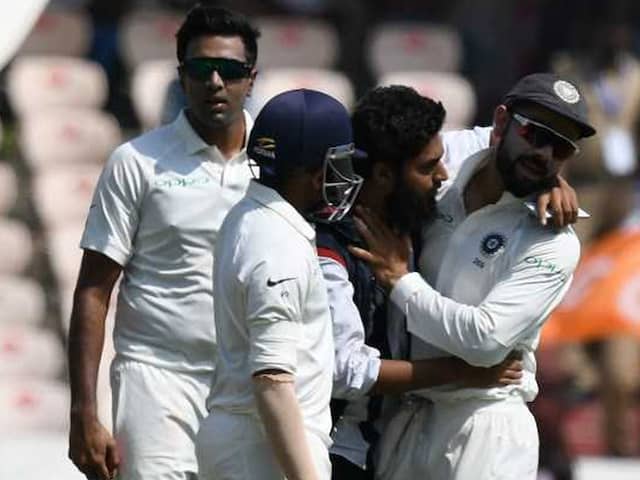 The fan was stopped before he was able to plant a kiss on Virat Kohli's cheek.© AFP

The opening Test between India vs West Indies saw two fans get past the security cordon at Rajkot and make their way to the pitch to take a selfie with India captain Virat Kohli and that trend seems to be catching up as a similar incident took place during the second Test in Hyderabad. An over-enthusiastic fan breached the security at the Rajiv Gandhi International Stadium on Friday to take a selfie with Kohli. The fan even tried to plant a kiss on the Indian star's cheek but was fortunately escorted off the field.

Kohli was fielding at mid-wicket at the time with 15 overs bowled on Day 1 of the second Test. The young fan ran on to the field and embraced Kohli, then took out his phone and tried to capture a selfie.

Kohli didn't look pleased and tried to maintain his distance before security personnel hauled the fan off the field. With play delayed by the incident, the umpires called for the drinks break.

One of the on-field umpires, Ian Gould was also seen chatting with the Indian captain, who was visibly upset.

Kohli, 29, is often the subject of adulation with one fan touching his feet before taking a selfie during an Indian Premier League game this year.

Meanwhile, Windies skipper Jason Holder won the toss and elected to bat in Hyderabad. The Windies openers Kieran Powell and Kraigg Brathwaite gave their team a solid start but failed to kick-on as Indian spinners made their mark.

Powell was dismissed by Ravichandran Ashwin for 22 while Brathwaite fell to the guile of Kuldeep Yadav. Shai Hope (36) and Shimron Hetmeyer steadied the Windies ship but they suffered another jolt at the stroke of lunch as Hope fell to Umesh Yadav.

The Windies went into lunch at 86 for three.

Virat Kohli India vs West Indies 2018 India vs West Indies, 2nd Test Cricket
Get the latest Cricket news, check out the India cricket schedule, Cricket live score . Like us on Facebook or follow us on Twitter for more sports updates. You can also download the NDTV Cricket app for Android or iOS.