The first ODI between India and South Africa could well be in for grief as rain has been forecast for the day. 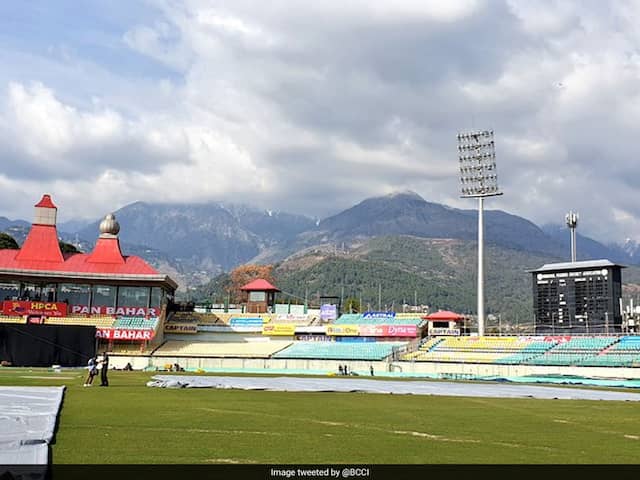 During the evening there is high possibility of a thunderstorm along with heavy rain in Dharamsala.© Twitter

India will look to overcome the series of defeats against New Zealand when they take on South Africa in the first One-day International (ODI) in Dharamsala on Thursday. Whether they can do that or not will largely depend on the rain gods as the weather forecast clearly predicts a high chance of showers, around 90 per cent, during the day. According to a weather tracking website accuweather.com, things are expected to turn worse during the evening as there is high possibility of a thunderstorm along with heavy rain which will lead to sharp decline in temperature by 2-3 degrees.

The last time when these two teams met at this venue for a Twenty20 International (T20I) game last year, it was abandoned without a being ball bowled.

India are heading into the series after facing a 0-3 defeat in their last ODI series in New Zealand, while the visitors are high on confidence after completing a 3-0 clean sweep over Australia in their last home series.

However, with the comfort of home venues India will be hoping for a better show, especially with the return of some of their key players like Hardik Pandya, Bhuvneshwar Kumar and Shikhar Dhawan, who are all making a comeback after recovering from their respective injuries.

South Africa have a nice blend of youth and experience in their squad and the home side would not mistake to take them lightly.

Faf du Plessis and Rassie van der Dussen, who were rested for the ODIs against Australia, are part of South Africa's touring party.

Janneman Malan earned his maiden India tour call as the 16th member of the squad after his match-winning ton in the second ODI against Australia.

South Africa Cricket Team Himachal Pradesh Cricket Association Stadium, Dharamsala Cricket India vs South Africa, 1st ODI
Get the latest Cricket news, check out the India cricket schedule, Cricket live score . Like us on Facebook or follow us on Twitter for more sports updates. You can also download the NDTV Cricket app for Android or iOS.