Hardik Pandya bowled the crucial last over in the deciding 3rd T20 International against New Zealand. 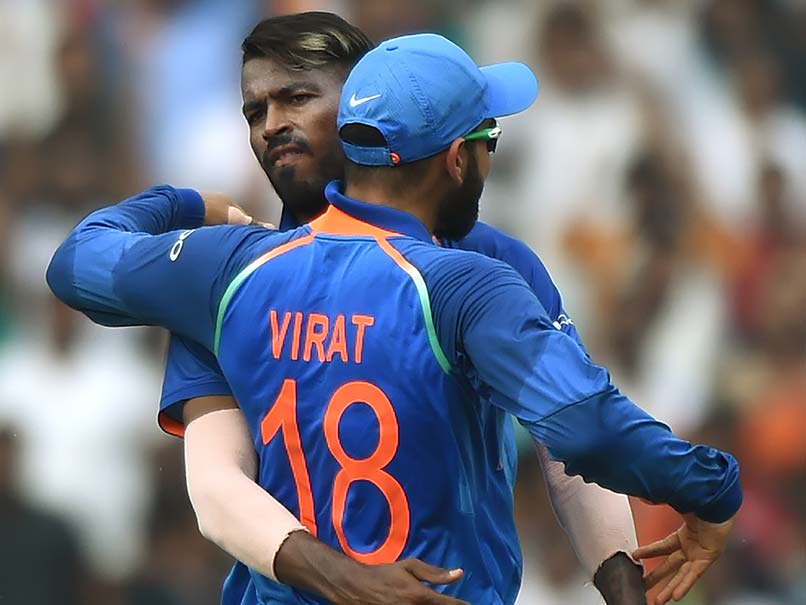 Hardik Pandya bowled the last over for India in the 3rd T20I vs New Zealand.© AFP

India captain Virat Kohli said he had complete faith in Hardik Pandya's "off-cutters" which came in handy during the tense final over of curtailed third T20I against New Zealand that India won by 6 runs. Defending 19 off the final over, Pandya gave away 12 runs as India wrapped up the series 2-1. "We had the confidence in Hardik, whose off-cutters are good. The wicket was damp tonight, so the ball was sticking to the wicket. I tried going up to him (in the final over), but after three balls he said, 'mein daal doonga, aap tension mat lo' (I will deliver, you don't worry)," Kohli said.

"As a captain, when you get that kind of confidence from your bowlers, you aren't left with much to say. He has confidence in his abilities and he finished off the game well," Kohli added.

He also lavished praise on the bowlers after the series T20 series win against New Zealand and said they deserved more credit than they got for their role in the team's success.

"They deserve a lot more credit than they usually get otherwise. The game has moved forward as a batsman's game, the shorter formats. When bowlers step up in the deciding games, it makes a difference. If you see, both teams got close to their totals, but it was the better bowling side which won the game."

Also, he said that as team they were more confident now, especially the bowling unit.

"We are quite confident where stand as a team, and as a bowling unit they definitely deserve a lot more credit for winning these past few series that they have, than they get usually. Big, big congratulations to them," the captain said.

Kohli also felt that the target of 68 off eight overs was a challenging one for the team batting second and said the bowlers did well to defend it.

"In the second innings, they didn't give too many boundary balls. We wanted our best bowlers to get done early and leave so many runs in the end they would be left with a lot. They executed the plans well."

The India captain also said the team members rose to the occasion despite it being a shortened game.

"It rained for so long, so to keep the mindset going for all the while isn't easy. You've to switch off a lot and then suddenly switch on. To do so in a decider game and to execute that so well (is great)," he said.

Comments
Topics mentioned in this article
India Cricket Team New Zealand Cricket Team Hardik Pandya Virat Kohli Cricket
Get the latest updates on ICC T20 Worldcup 2022 and CWG 2022 check out the Schedule, Live Score and Medals Tally. Like us on Facebook or follow us on Twitter for more sports updates. You can also download the NDTV Cricket app for Android or iOS.