The Delhi batsman told reporters that Dhoni not just understood his game but also his body, adding that people lacked patience when it came to judging the former India captain's performance. 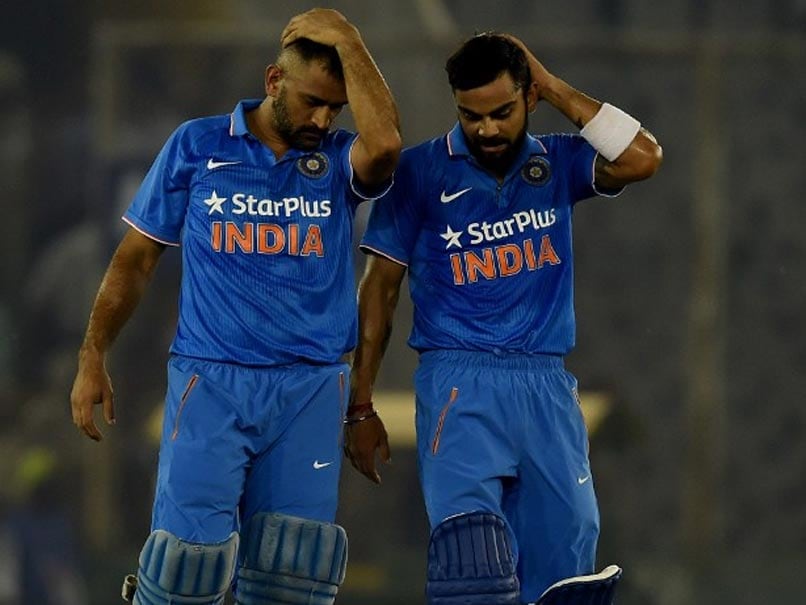 India captain Virat Kohli came out in strong support of MS Dhoni yet again after his side clinched the three-match T20 series against New Zealand with a 6-run win in the decider on Tuesday. Kohli termed the recent criticism of Dhoni as 'unfair' and also cited his predecessor's fitness and contribution to the side to drive home his point. The wicketkeeper-batsman came under fire after his 37-ball 49 in the 2nd T20I in Rajkot where India were comprehensively beaten by 40 runs.

"First, I don't understand why are people only pointing him out, I'm not able to understand this. If I fail three times, no one is going to point fingers at me because I'm not over 35. The guy is fit, he is passing all the fitness tests, he is contributing to the team in every way possible, tactically on the field, with the bat. If you look at the series against Sri Lanka and Australia, he did really well and in this series he hasn't got much time to bat," Kohli said during the post-match press conference in Thiruvananthapuram.

The 29-year-old stated that only one man was being targeted for the team's poor performance in the Rajkot T20I.

"You have to understand, the position in which he comes out to bat, even Hardik [Pandya] could not score in that game. Then why are we only pointing out one man? Hardik also got out in the last T20 that we played in Rajkot. We are conveniently targeting only one man which is not fair. We also have to look at the fact that by the time he comes in, either the run rate is already eight-and-a-half or nine-and-a-half and the wicket is also not the same when the new ball is bowled.

"Also, the batsmen who are set from the top, they find it easier to strike the ball straightaway compared to the guys who come lower down the order. And the kind of wicket that we have played on, the wear and tear has been much more in the latter half. You have to assess everything," Kohli said.

The Delhi batsman told reporters that Dhoni not just understood his game but also his body, adding that people lacked patience when it came to judging the former India captain's performance.

"As team management and players, we understand the situations in which he goes out to bat. We don't get emotional and excited by the opinions of people who are looking at things from a different point of view. If you are playing, you know how the wicket is and what the situation is like. So, I think he is doing absolutely fine. He understands his game, he understands his role, but it doesn't come off every time. He hit a six in Delhi and it was shown five times in the post-match show. Everyone got really happy. And suddenly he doesn't score in one game and we are after his life. I think people need to be a bit more patient. He's a guy who understands various cricketers. He's a very smart guy. He understands where he stands with his body, with his game. So I don't think anyone else has the right to decide that for him."

Commenting on the win against the Kiwis, Kohli said that having won a few matches on the trot make them proud. "We have won a few on the trot and it makes us very proud. This stadium is beautiful, the outfield wonderful and the crowd made it special. I am surprised there were no games here earlier," he added.

Talking about the delayed game, Kohli further added, "I think we were really happy to get a game. This crowd deserved to watch some action. Ever since the ODIs started, we expected them to give a good fight. We were nervous to start here, with the damp pitch."