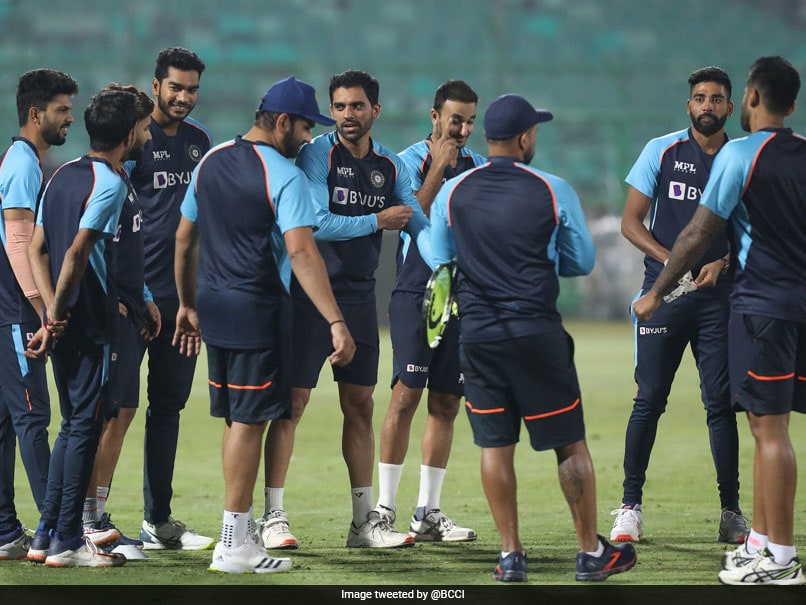 Team India players during a practice session in Jaipur on Monday evening.© Twitter

With a new coach and a new T20I captain at the helm, Team India face T20 World Cup finalists New Zealand in a three-match T20I series starting at the Sawai Mansingh Stadium in Jaipur on Wednesday. New head coach Rahul Dravid oversaw the preparations on Monday as the Indian players were put through their paces ahead of the first T20I. The team also has a new leader in the shortest format in the form of Rohit Sharma after Virat Kohli stepped down from the post following the culmination of India's campaign at the recently-concluded T20 World Cup.

India will have their task cut out against a strong New Zealand outfit that finished runners-up at the T20 World Cup, losing to Australia in the final.

India will be without many big stars like Virat Kohli, Jasprit Bumrah and Ravindra Jadeja.

New Zealand too have a couple of players missing. The NZC on Tuesday announced that captain Kane Williamson will give the T20I series in India a miss to focus on the two-match Test series that begins on November 25 in Kanpur.

The Blackcaps will also be without star batter Devon Conway who had injured his hand during the T20 World Cup and had also missed the final against the Aussies.

For both teams, the series be a chance to shake off the disappointment of the T20 World Cup. India, especially, will be looking to bounce back after a poor campaign in the UAE that saw them losing their opening two matches to Pakistan and New Zealand.

The two losses meant that India had to rely on favours from some other teams but none came as Kohli's T20I reign as skipper ended with a whimper. The T20 World Cup was also coach Ravi Shastri's swansong and his replacement Rahul Dravid will have his own ideas that he would want to quickly take on board with the next T20 World Cup only a year away in Australia.

After a sterling season with Chennai Super Kings, Ruturaj Gaikwad could get a chance to make an impression on the international stage while Yuzvendra Chahal will have a point to prove after being left out of the squad for the T20 World Cup.

Harshal Patel, the Purple Cap winner in IPL 2021, could also make his international debut for India while Avesh Khan and Venkatesh Iyer are also among the new faces in the Indian team.

Rohit Sharma
Get the latest updates on IPL Auction 2023 and check out  IPL 2023 and Live Cricket Score. Like us on Facebook or follow us on Twitter for more sports updates. You can also download the NDTV Cricket app for Android or iOS.