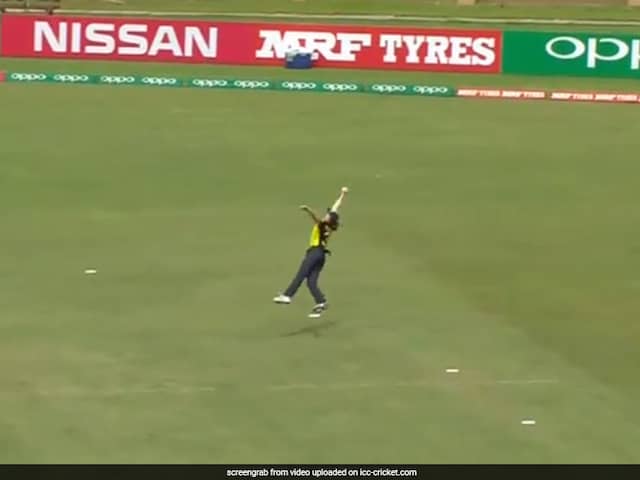 Tayla Vlaeminck was making her debut for Australia in the T20Is.© Screengrab: icc-cricket.com

India continued their winning run in the ICC Women's World T20 by beating three-time Champions Australia by 48 runs to seal the top spot in Group B on Saturday. However, the most brilliant moment of the match came out of the Australian camp when their fast bowler Tayla Vlaeminck took a stunning one-handed catch to dismiss Veda Krishnamurthy in the final group stage match of the tournament in Guyana, West Indies.

In the 16th over, Krishnamurthy played a powerful hook shot on a short-pitched delivery by spinner Ashleigh Gardner, hoping to clear the covers for a boundary.

Vlaeminck, who was making her debut for Australia in the T20Is, was fielding at the backward square leg. She jumped backwards, stretching out her right hand to grab the ball in the mid-air, ending of Krishnamurthy's innings just for 3 runs.

This was just a little bit special from @TaylaVlaeminck on her T20I debut - an absolute stunner of a catch! #WT20 #WatchThis pic.twitter.com/iFe6oV4Dxe

Smriti Mandhana, who was struggling with the bat, came to the fore with a brilliant knock of 83 from just 55 deliveries, and skipper Harmanpreet Kaur chipped in with an explosive 27-ball 43 before the bowlers did a fine job to bowl Australia out for 119.

Although both teams had already qualified for the semi-final stage, the victory against Australia will be a confidence-boost for India going into the knockouts.

By virtue of this win, India topped Group B with eight points while Australia find themselves in the second spot with six points.

The side led by Harmanpreet Kaur will next face either West Indies or England in the semifinal on Thursday.