Harmanpreet Kaur smashed 103 off 51 balls and her carnage included eight sixes, some of them towering, and seven boundaries. 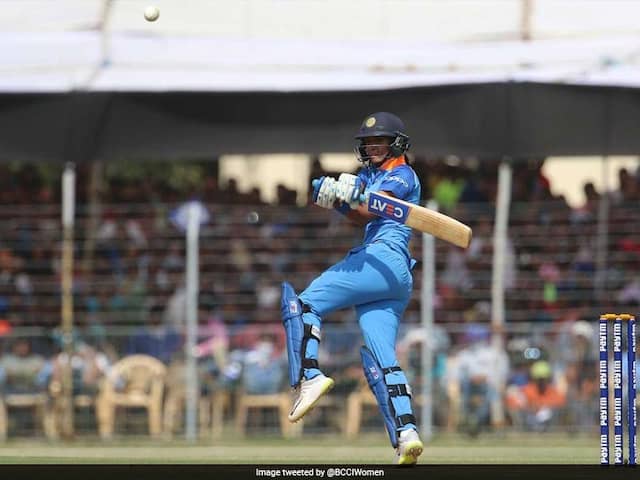 The hitting was incredible and the sixes unbelievably monstrous, making Harmanpreet Kaur the first Indian woman to record a century in the format and propelling her team to a 34-run win over New Zealand in the World T20 opener on Friday. The 29-year-old smashed 103 off 51 balls and her carnage included eight sixes, some of them towering, and seven boundaries. Opting to bat after the coin landed in her favour at the Providence Stadium, Harmanpreet and Jemimah Rodrigues (59 off 45 balls) added 134 runs for the fourth wicket to guide India to an imposing 194 for five in the stipulated 20 overs. In reply, New Zealand were stopped at 160 for nine.

"Good game but we still have a long way to go. (Regarding my batting) I needed to settle down," Harmanpreet said after the convincing win.

Harmanpreet was required to walk into the middle early, at the fall of debutant Dayalan Hemalatha's wicket in only the sixth over. India were in a spot of bother when Hemalatha was dismissed, and another wicket would have only added to their worry.

However, Harmanpreet and Jemimah had other ideas, adding runs at a quick pace, which included a phase when India scored 56 runs in five overs. Harmanpreet, whose scintillating 171 against Australia in the World Cup semifinal last year remains fresh in the memory, looked comfortable from the word go and, in the company of Jemimah, built the innings with consummate ease.

Harmanpreet got into the mode with two sixes off Jess Watkin in the 10th over, as India reached 76 for the loss of three wickets. Her team added a staggering 118 runs in last 10 overs, thanks to a flurry of boundaries and sixes by Harmanpreet.

The big-hitting Harmanpreet played shots on all sides of the wicket, and was most effective towards the long-off, long-on and the deep mid-wicket region. The 100-run partnership was up in quick time, after the duo scored 16 runs in one of the overs in the back 10. That was just one of the big overs for the team.

Having cleared the fence eight times, Kaur now has the most number of sixes for India in a T20 innings, beating her own record of, five set against Sri Lanka in September this year.    Having struck seven boundaries, Rodrigues, at 18, became the youngest player to score a fifty in Word T20 tournament. But, in her attempt to up the ante, gave away her wicket.

Chasing a stiff target, New Zealand were off to flyer with the seasoned Suzie Bates (67 off 50 balls) and Anna Peterson (14) racing to 52 in just under seven over. While Peterson was dismissed by Hemalatha for India's first breakthrough, Bates continued to bat fluently and kept New Zealand in the hunt.

However, Bates, who became the highest run-getter in T20 Internationals, could not find support at the other end as New Zealand were reduced to 93 for four in the 13th over.

India got the big wicket of Bates when she played Arundhati Reddy's low full-toss to the backward point fielder. Bates struck eight boundaries during her stay in the middle. The contest was as good as over for New Zealand after Bates' dismissal and India kept up the pressure on their opponents. Hemalatha and Poonam Yadav finsihed with three wickets apiece for India, and there were two for Radha Yadav.

New Zealand Women Harmanpreet Kaur Providence Stadium, Guyana Cricket
Get the latest updates on IPL 2020, check out the IPL Schedule for 2020 and Indian Premier League (IPL) Cricket live score . Like us on Facebook or follow us on Twitter for more sports updates. You can also download the NDTV Cricket app for Android or iOS.