How Chennai Super Kings are Acing the Opening Gambit 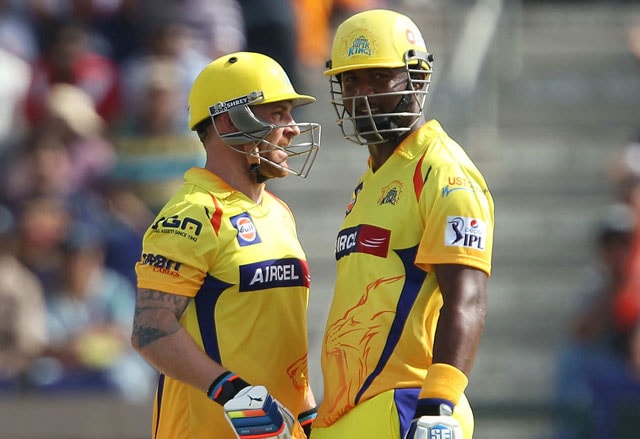 While a majority of the eight teams have struggled to find their perfect opening combination in the Indian Premier League 2014, Chennai's Dwayne Smith and Brendon McCullum have done consistently well to put their side on course for yet another successful campaign.

The Indian Premier League, across seven seasons, has seen batting emerge from two distinct schools of thought. Teams have either crashed and burned their way to a good total with an 'all's-well-that-ends-well' philosophy or have managed to imbibe some method to their madness by starting with a flourish and consolidating from thereon.

In the ongoing season, table-toppers Chennai Super Kings find themselves at the opposite end of the spectrum when compared to the rest of the teams as far as batting approach is concerned. Much to Chennai's delight, a new opening combination in Dwayne Smith and Brendon McCullum has worked well on a rather consistent basis, while other teams continue to fight internal battles in their eternal search for the 'perfect' combination at the top of the order.

Made of similar attacking mould, McCullum and Smith have done exceedingly well together so far. Smith (440 runs) and McCullum (333 runs) are placed second and third in the leading run-scorers in the season so far, only behind Glenn Maxwell (474 runs). They have scored eight fifties between them already (Smith 5, McCullum 3) and have put on the highest first-wicket partnership of the season (123 vs Kings XI Punjab).

After the player auctions in early February, Mumbai Indians would have been a side that may have been optimistic about their perennial opening combination woes, after having secured the services of Michael Hussey. The veteran Australian's tally of 733 runs for the Chennai Super Kings in the sixth season in 2013 was the joint-highest ever in the history of the tournament (With Chris Gayle in 2012), making him hot property.

Unfortunately for them, Hussey failed to keep his form going and after some early struggle, he has been relegated to the Mumbai bench. After a couple of more hit and miss options, Mumbai have roped  in West Indian Lendl Simmons, who has done relatively well in the three matches he has played so far.

Kolkata Knight Riders and Kings XI Punjab have also failed to find the best opening combination, with veterans like Gautam Gambhir and Virender Sehwag intermittently firing for their respective sides. At best, they may have found stop-gap situation-based options, but the long-term solution remains to be a worry. Rajasthan Royals have mixed and matched combinations, using the 'horses-for-courses' ploy to their advantage and yet may not possess a single opening pair that the team can turn to for providing a blitzkrieg of a start to the innings.

Delhi Daredevils and the Royal Challengers Bangalore, too, have not been successful in finding a potent opening pair. While Chris Gayle's persistent injury has kept him from producing a special knock, something he has done with consistent frequency in the last couple of seasons, Delhi's investment in Murali Vijay has not been at par with their expectation. Although Delhi are out of contention for the play-offs, Pietersen has promoted himself to open the innings in a bid to give his side the initial burst of runs. If this works consistently, Delhi can take it away as a consolation at the end of yet another disappointing campaign.

Sunrisers Hyderabad are probably the only side that have two batsmen in their ranks who can match up to Smith and McCullum. Yet, their strategy to not open the innings with Aaron Finch and David Warner has been confounding. On one of the occasions that Warner and Finch came together at the crease, they added an unbeaten stand of 128 runs off just 82 balls for the second wicket against the Delhi Daredevils. Yet, the Sunrisers management has resorted to playing Warner in the middle-order. Barring his 37-ball 45 against the Kings XI Punjab, 'regular' opener and skipper Shikhar Dhawan has struggled to strike form. His continued ploy to open the batting needs to be addressed by the think tank sooner than later if they have ambitions of making the playoffs for second time in a row.

While one argument could be that Chennai's famed middle-order consisting of Suresh Raina, MS Dhoni and Ravindra Jadeja gives Smith and McCullum the extra freedom at the top, it does seem like a punt that Sunrisers should invest in by asking Warner and Finch to play a similar role at the top. Their failure could trigger a collapse but the chances of them blazing away also presents an opportunity to put a big total and give their strong but out-of-form bowling attack something to defend.