Hansi Flick wants Bayern Munich to "seal the deal" and wrap up an eighth consecutive Bundesliga title on Tuesday with victory at relegation-threatened Werder Bremen. 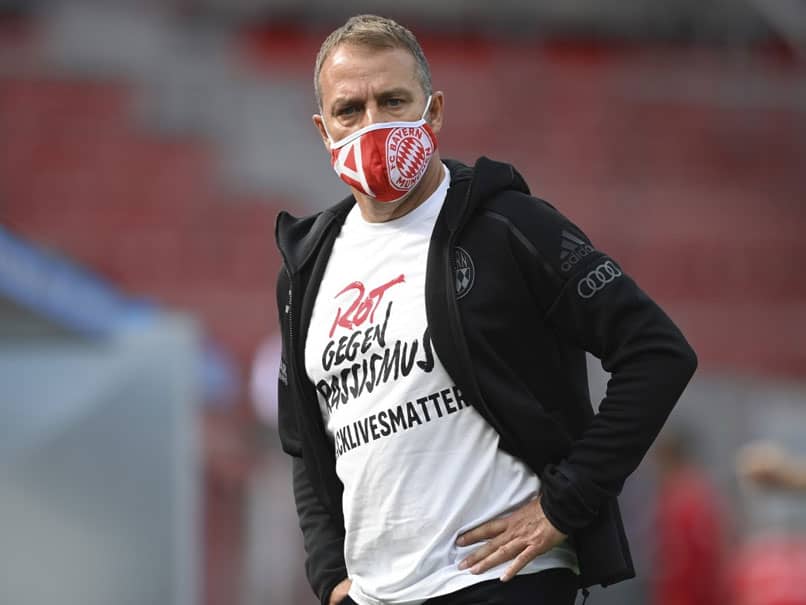 Bayern Munich are also well within reach of the Champions League quarter-finals.© AFP

Bayern Munich coach Hansi Flick wants his side to "seal the deal" and wrap up an eighth consecutive Bundesliga title on Tuesday with victory at relegation-threatened Werder Bremen. Top scorer Robert Lewandowski and Thomas Mueller, one shy of the record for assists in a single season, are both available again after missing Bayern's 2-1 win over Borussia Moenchengladbach due to suspension. Victory at Bremen, where Bayern have won all 12 games over the last decade, will clinch a record-extending 30th league title, and the first leg of a potential treble in Flick's debut season in charge.

"We want to finish the job on Tuesday. That is our goal. We have an excellent run and want to continue our winning streak," said Flick, who stepped in when Niko Kovac was sacked last November.

"The target is to win again in Bremen. We want to just seal the deal."

Bayern have won their last 10 league games and another victory on Tuesday would leave them an unassailable 10 points clear before second-placed Borussia Dortmund, who have three matches left, host strugglers Mainz on Wednesday.

"It's our plan to bring it (the trophy) back home," said midfielder Leon Goretzka.

Lewandowski, the league's leading scorer with 30 goals this term, netted twice while Mueller, who is sitting on 20 assists, also got on the scoresheet when Bayern thrashed Bremen 6-1 when the sides met in December.

Poland star Lewandowski has struck 45 goals in all competitions this campaign and needs one more to establish a new Bundesliga personal best, having also reached the 30-goal plateau in 2015-16 and 2016-17.

Despite laboured displays in their last two games, including a 2-1 semi-final win over Frankfurt in the German Cup, Bayern have a legitimate shot at landing a second treble in seven years.

First, Bayern, who are also well within reach of the Champions League quarter-finals, must take care of a Bremen side fighting for Bundesliga survival.

Bremen have taken 10 points from a possible 18 recently, boosting their hopes with a 5-1 rout of bottom side Paderborn on Saturday, but head coach Florian Kohfeldt played down any talk of an upset.

"There's no reason to go into this with any kind of euphoria. We haven't won anything yet and we're still in a relegation zone," said the 37-year-old Kohfeldt, who has lost all five games against Bayern.
Player to watch: Andre Silva

The Portugal international has struck a rich vein of form since the season's resumption, with a return of six goals in seven appearances -- more than any other player in the league.

The 24-year-old striker is rebuilding his young career while on loan in Germany, after struggling with AC Milan following a big-money move from Porto in 2017.

He has scored 10 times in 22 Bundesliga appearances with Eintracht, and came off the bench to net twice and grab an assist in Saturday's 4-1 win at Hertha Berlin.

Bayern München Cricket
Get the latest updates on India vs Australia Series, check out the India vs Australia Schedule for 2020-21 and Ind vs Aus live score . Like us on Facebook or follow us on Twitter for more sports updates. You can also download the NDTV Cricket app for Android or iOS.