Combination of poor catching, bad weather and some determined Pakistan batting conspired against #JamesAnderson who was left just one shy of becoming only the fourth bowler to take 600 Test wickets 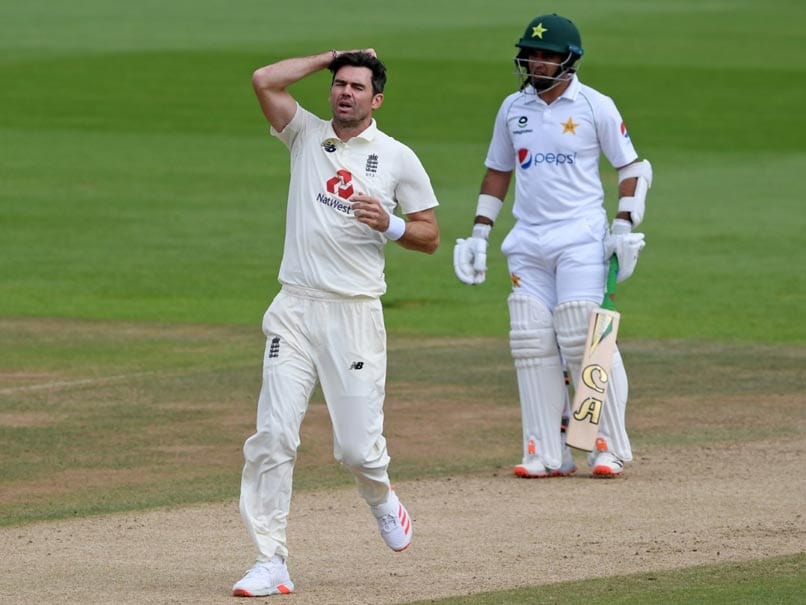 James Andersonwas left just one shy of becoming only the fourth bowler to take 600 Test wickets as a combination of poor catching, bad weather and some determined Pakistan batting conspired against the England paceman at Southampton on Monday. Anderson, denied an early breakthrough when Jos Buttler dropped a routine chance to reprieve Shan Masood, returned for a third spell late on the fourth day of the third Test to have opener Abid Ali lbw. That took the 38-year-old to 599 Test wickets but even though the floodlights were on, the umpires ruled the only way play could continue safely was with spin from both ends. As a result Anderson, who had miserly figures of 1-18 from 12 overs was replaced by England captain Joe Root, who bowled his part-time off-breaks in partnership with frontline spinner Dom Bess.

But with the natural light fading, the umpires decided conditions were unsafe even under for slow bowling.

Rain then fell to end any hope of a resumption, with more showers forecast for Tuesday's final day.

Azhar Ali, the Pakistan captain, was 29 not out following his first-innings century and Babar Azam unbeaten on four.

If England, as now seems highly likely, avoid defeat they will win their first Test campaign against Pakistan in a decade. Root's men are 1-0 up in a three-match campaign.

Anderson started the day with 598 wickets and then saw Buttler drop a fourth catch in 37 balls off his bowling.

After an initial rain break of more than three-and-a-half hours, Masood fell lbw playing no shot to Stuart Broad for 18.

Anderson, switched to Gough's end, had Abid lbw for a painstaking 42, with the batsman's fruitless review leaving Pakistan 88-2.

No paceman has yet reached the landmark figure of 600 Test wickets.

The only bowlers ahead of the 38-year-old Anderson in the all-time list are three retired spinners -- Sri Lanka's Muttiah Muralitharan (800), Australia's Shane Warne (708) and India's Anil Kumble (619).

Anderson started the day in sight of the select group after taking 5-56 -- his 29th five-wicket haul in 156 Tests -- during Pakistan's first-innings 273.

He might even have reached the landmark late on Sunday had not three catches been dropped off his bowling with the new ball.

And there was more frustration for Anderson when Masood, on three, edged an intended drive outside off-stump only for the ball to hit Buttler on the thigh as he failed to get his gloves to a chance far less difficult than several catches he held on Sunday.

England batsman Ollie Pope injured his shoulder chasing a ball to the boundary and was replaced by James Bracey, with the substitute fielder summing up the hosts' morning when his needless shy at the stumps led to four overthrows.

Pakistan resumed on Monday a huge 310 runs behind a total built on Zak Crawley's 267 and Buttler's 152. The pair shared an England fifth-wicket record stand of 359.

Azhar's superb 141 not out kept England at bay longer than looked likely after his side collapsed to 75-5 on Sunday.

Azhar found an ally in Mohammad Rizwan, with the wicketkeeper making 53 in a sixth-wicket stand of 138.

James Anderson Azhar Ali England vs Pakistan, 3rd Test Cricket
Get the latest updates on ICC T20 Worldcup 2022, check out the Schedule and Live Score. Like us on Facebook or follow us on Twitter for more sports updates. You can also download the NDTV Cricket app for Android or iOS.