England lost their final seven wickets for 25 runs to be bowled out for 136. 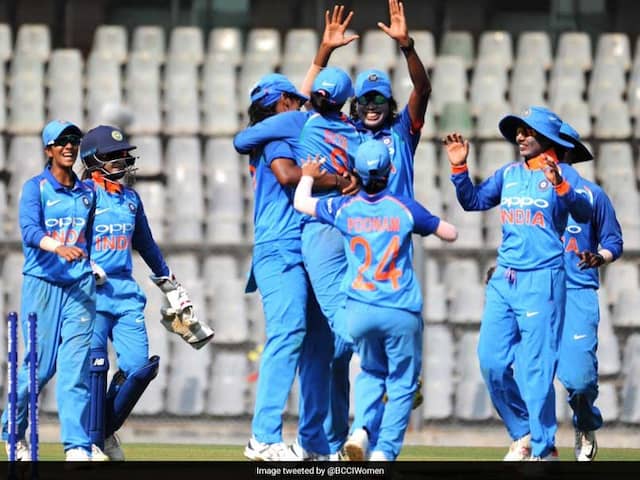 India defeated England by 66 runs in the opening ODI.© Twitter

World champions England had their batswomen to blame as they made heavy weather of a small target and lost to India by 66 runs in the opening ODI at the Wankhede Stadium in Mumbai on Friday. In the first fixture of this ICC Women's Championship rubber, Ekta Bisht starred with the ball for the hosts with figures of 4/25. The visitors lost their final seven wickets for 25 runs to be bowled out for 136. For England, a 73-run stand between Natalie Sciver and captain Heather Knight was all they could muster as the lower-order could not handle the pressure of a run chase.

Sciver was on 44 off 66 when she backed up far too out of the crease at the non-striker's end and Knight's shot rolled back in the direction of Bisht who had all the time in the world to throw down at the bowling end.

Danielle Wyatt fell to Deepti Sharma in the next over and Bisht then ensured that the rest of England's lower middle-order fell in quick succession.

Knight remained unbeaten on 39 as she ran out of partners.

India jolted England early with pacer Shikha Pandey dismissing Amy Jones and the returning Sarah Taylor with almost identical deliveries that moved back sharply to catch the two batters plumb in front of the stumps.

Deepti Sharma removed Tammy Beaumont as England recovered from 38/3 but it was not enough in the end.

Earlier, put into bat, India threw away a strong start from Jemimah Rodrigues (48 off 58) and Smriti Mandhana (24 off 42) to lose five wickets for the addition of 26 runs, slipping to 95/5 before Mithali Raj (44 off 74) stemmed the rot with a 54-run partnership with Taniya Bhatia.

Jhulan Goswami then struck three fours and a six in her 37-ball knock of 30 to push India past the 200-mark.