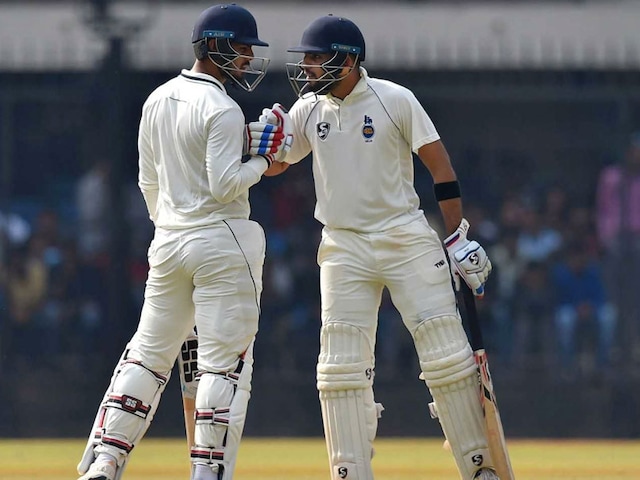 Delhi continued their undefeated run in the Vijay Hazare Trophy thrashing Maharashtra by eight wickets at Dharamsala even as Vidarbha stretched their unbeaten streak to four matches, getting past the Services by 17 runs at Secunderabad on Friday. Group B toppers, Delhi collected four points riding on skipper Pradeep Sangwan's fifer and later an unbeaten century from Dhruv Shorey (103) to tame Maharashtra by eight wickets.

Put in to bat, Maharashtra managed 246, thanks to Shamshuzama Kazi's 59 runs lower down the order even as Sangwan (5/41) ripped through the top order before Pawan Negi (3/40) joined the party in dismissing the middle order.

In response, Delhi recovered quickly from Unmukt Chand's (1) loss, courtesy Hiten Dalal (87) and Shorey's 138-run second wicket stand. Shorey then forged another 108-run unbeaten partnership in the company of Nitish Rana (49 not out), to help his side cross the line with 35 balls to spare.

In another Group B fixture, Vivek Singh's 125-ball 147 for Bengal went in vain, as his team fell short of Uttar Pradesh's 329/4 by a mere 7 runs at Bilaspur.

In another tie of the same group, hosts Himachal Pradesh pipped Kerala by 1 wicket at Nadaun.

In Group D, Vidarbha continued their fabulous run to lead the table after getting past the Services by 17 runs.

Electing to bat after winning the toss, Vidarbha rode on half centuries from Apoorv Wankhade (73) and Karn Sharma (54) to put on 267/9 before restricting the opposition to 250 runs, despite a fine 77-ball 100 from Diwesh Pathania.

In other Group D matches, hosts Hyderabad beat Saurashtra by 4 wickets while Chhattisgarh pipped Jammu and Kashmir by five runs at Secunderabad.

In Group C, hosts Tamil Nadu lost to Madhya Pradesh by 8 wickets while Andhra Pradesh edged past Goa by 1 wicket, also in Chennai.

In another Group C tie in Chennai, Rajasthan rode on Amitkumar Gautam's unbeaten 136-ball 147 to chase down Mumbai's 268/8 with 15 balls and six wickets to spare.

Comments
Topics mentioned in this article
Nitish Rana Dhruv Shorey Cricket
Get the latest Cricket news, check out the India cricket schedule, Cricket live score . Like us on Facebook or follow us on Twitter for more sports updates. You can also download the NDTV Cricket app for Android or iOS.