With Lahore Qalandars eyeing a big total in the game, David Wiese didn't hold back as he smashed Maqsood's deliveries all over the park for the remainder of the over. 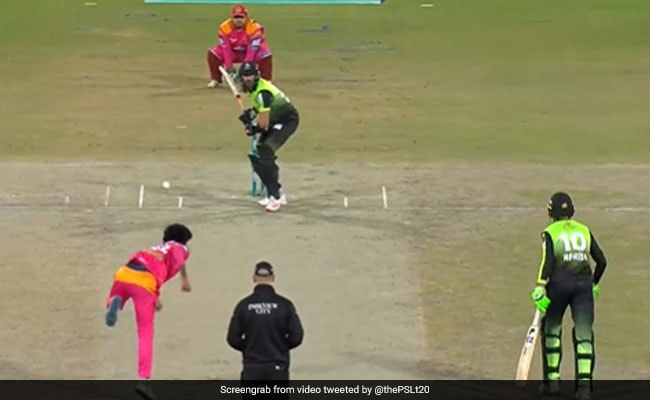 DavidWiese hit three sixes in the last over

Namibian cricketer David Wiese displayed his wide range of shots as he smashed Pakistan bowler Waqas Maqsood for 27 runs off the final over while batting for Lahore Qalandars in their Pakistan Super League (PSL) playoff match against Islamabad United on Friday. Batting first at the Gaddafi Stadium in Lahore, Qalandars were 141/7 from 19 overs when Wiese, having faced just two deliveries till that point, prepared to face Maqsood. The Pakistani pacer, however, started his over with a wide delivery.

With Qalandars eyeing a big total in the game, Wiese didn't hold back as he smashed Maqsood's deliveries all over the park for the remainder of the over.

After beginning with two sixes, Wiese hit a boundary, before taking two runs. The former Royal Challengers Bangalore cricketer then hit another six, before finishing off the over with two runs.

PSL shared a video of the over in its official Twitter account. “'WIESE' is all you could hear in the ground as the big man flaunted his firepower,” read the text accompanying the video.

Watch: David Wiese's big hits in the final over of Lahore Qalandars' innings

'WIESE' is all you could hear in the ground as the big man flaunted his firepower. #HBLPSL7 I #LevelHai I #LQvIU pic.twitter.com/JTHrBuFHVA

Propelled by Wiese's late flourish and Abdullah Shafique's fifty, Lahore Qalandars recovered from a poor start to post a total of 168/7.

Shadab Khan and Maqsood grabbed one wicket each.

Lahore Qalandars had finished the league phase of PSL in second spot behind table-toppers Multan Sultans while Islamabad United had finished in fourth spot.

Comments
Topics mentioned in this article
David Wiese Cricket
Get the latest updates on ICC T20 Worldcup 2022, check out the Schedule and Live Score. Like us on Facebook or follow us on Twitter for more sports updates. You can also download the NDTV Cricket app for Android or iOS.