Fan Suggests Only Way To Get David Warner Out, It Makes Stuart Broad "Smile"

Stuart Broad, who was engaged in the second Test against New Zealand in Hamilton, stumbled upon a meme on Twitter, in which a fan suggested how to dismiss David Warner. 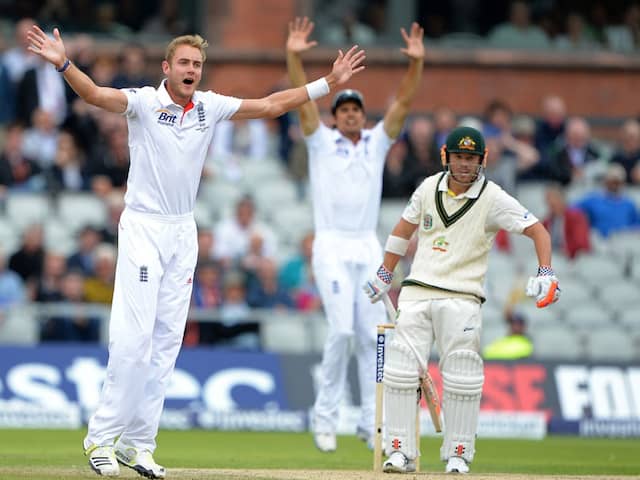 Stuart Broad was engaged in the second Test against New Zealand in Hamilton.© AFP

David Warner scored his maiden triple century, breaking several records with his unbeaten 335-run knock, on Day 2 of the second Test against Pakistan in Adelaide on Saturday. The 33-year-old left-handed batsman smashed Pakistani bowlers left, right and centre in his 418-ball knock that was decorated with 39 boundaries and a six. With Pakistani bowlers struggling against a rejuvenated David Warner, a fan suggested the visitors an idea to get rid of the aggressive opener, but with a meme.

The user had morphed a picture of Pakistani bowler with England fast bowler Stuart Broad's face on it. "The only way Pakistan are getting David Warner out," the user captioned the meme on Twitter.

Stuart Broad, who was engaged in the second Test against New Zealand in Hamilton, stumbled upon the meme and didn't shy to react on Twitter.

"Really made me smile," Broad said in reply to the hilarious tweet with a laughing emoji.

Really made me smile

Broad was the wrecker-in-chief for England as he claimed four wickets to help England bowl out New Zealand for 375.

However, England lost two early wickets and were reduced to 39/2 at stumps on Day 2 in their bid to clinch a series-levelling win against New Zealand.

In Adelaide, Warner became the only batsman to score a triple-century at the iconic venue. The previous best at the Adelaide Oval was 299 (not out) by Don Bradman against South Africa in 1932.

Australia declared their first innings for 589/3 soon after Warner surpassed batting legend Don Bradman and Mark Taylor in the list of highest individual score in Tests by an Australian.

David Warner Cricket Australia vs Pakistan, 2nd Test New Zealand vs England, 2nd Test
Get the latest Cricket news, check out the India cricket schedule, Cricket live score . Like us on Facebook or follow us on Twitter for more sports updates. You can also download the NDTV Cricket app for Android or iOS.
Advertisement