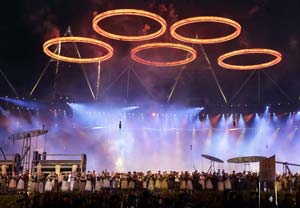 For the longest time, I was a sceptic when it came to cricket at the Olympics. If a gold medal isn't the pinnacle of your sport, then it doesn't really belong at the games. Or so I thought.

For the longest time, I was a sceptic when it came to cricket at the Olympics. If a gold medal isn't the pinnacle of your sport, then it doesn't really belong at the games. Or so I thought.

On Wednesday night, I watched Roger Federer get as animated as I've ever seen him, tussling desperately to avoid elimination from the men's doubles. This is a man with 17 Grand Slam titles, and the doubles gold from Beijing. For someone with nothing left to prove, his disappointment in defeat was palpable.

The same night, Craig Bellamy and Edinson Cavani mouthed off at each other in the final stages of the football game between Great Britain and Uruguay. Cavani has won the Copa America with Uruguay, and is well on his way to becoming one of the great strikers of his generation.

Bellamy, during the course of an itinerant career, has scored goals at venues as hallowed as the Camp Nou. Part of a generation of Welsh footballers not quite good enough to qualify for the World Cup or the European Championships, he's taken the Olympic assignment very seriously. Some lighthearted summer fun, it most certainly isn't.

The value of a gold medal is inextricably linked to tradition. Winning Wimbledon will always be more important than Olympic gold simply because tennis's roll of honour at the Olympics doesn't include names like Don Budge, Rod Laver, Bjorn Borg and Pete Sampras. The football event will never have the allure of the World Cup because it didn't showcase the talent of Pele, Diego Maradona or Johan Cruyff.

But does that mean the Olympic events don't matter? Of course it doesn't. After clinching that doubles gold in Beijing, Federer described it as "sort of a dream come true moment. Maybe it comes around once in a lifetime."

Where does cricket fit into all this? For now, it doesn't, and thanks to the attitude of the powerful boards, it's unlikely to in the distant future. With cricket, it's hard to say what the pinnacle of achievement is. For an Englishman, it probably remains winning the Ashes. Ask an Indian, and he might choose the 50-over World Cup. With Test cricket never having had a championship and the Twenty20 game so new, the 50-over World Cup is the only global event with some sort of tradition on its side.

If cricket were to apply for a place at the Olympic table, it would likely be in its Twenty20 avatar. That would be the cue for traditionalists to say that it's not 'proper' cricket that was being demonstrated to the world. Such attitudes don't help.

The stereotyping of Twenty20 as a version of the game that requires little skill is just lazy. It's also based on the assumption that everyone finds the same things appealing. My interest in cricket blossomed after watching the West Indies sides of the 1980s. They batted with flair and imagination, bowled with menace, and fielded with athleticism and grace. They were never boring.

I loathed the tortoise-paced Tests that India and Pakistan played out in 1987. For someone young looking to be entertained, those games offered nothing. Yet, I'm sure there are those of another generation that recall them with fondness and see them as a version of chess on grass.

Rugby authorities were quick to recognise that their audience was largely divided into two groups. The traditionalists still love the 15-man game, with its rucks, mauls, scrums and physicality. But a new generation has grown up enthralled by sevens rugby, with more broken-field running and fewer stoppages.

The sevens game has also become the perfect vehicle for rugby expansion and will make its first Olympic appearance in Rio de Janeiro in 2016. Rugby Union still has its World Cup and prestigious club competitions like the Super XV, but by recognising that the sevens game is a different beast, the administrators have exposed a once-cliquey sport a wider audience.

Cricket could do that too but for the selfishness of some. Traditionally, the Olympics take place in July-August. Apart from England and Sri Lanka, very few countries host cricket in that period. And since the games last just two weeks, making a small tweak to the schedule once every four years is hardly asking for the moon.

The reality is that the powerful boards, especially those of India, England and Australia, hold the keys to the safe and make their own rules. If they were to tie up with the Olympic movement, it would mean following other guidelines and marching to another drumbeat. In an age when administrators measure success by the number of zeroes in the TV deals that they sign, that's not an option.

Seeing the pride on the faces of Federer and Novak Djokovic as they carried their nations' flags at the opening ceremony made you wonder. Steve Waugh has spoken of how much he would have loved to be part of the games. Sachin Tendulkar, who would surely have carried the flag had cricket been at the Olympics, sent a tweet congratulating Gagan Narang on his bronze in the 10m air rifle.

Whether it be 50 overs or Twenty20, several of the game's greats would have savoured the opportunity to rub shoulders with Usain Bolt and Michael Phelps. And just imagine what it would have done for an Afghan cricketer - few countries have made such rapid progress in such a short time - to carry the flag on opening night.

When you prefer to watch Tarundeep Rai, an archer you'd never heard of, staging an incredible comeback instead of yet another Sri Lanka-India ODI, you know that cricket is missing out. But with so many that run the game having a frog-in-the-well mindset, nothing's going to change. Instead of the five Olympic rings, you'll have five more ODIs for the Who Cares Cup.

Comments
Topics mentioned in this article
Cricket Craig Bellamy Athletics Novak Djokovic Rafael Nadal Andy Murray Roger Federer David Ferrer Bernard Tomic Stanislas Wawrinka
Get the latest updates on ICC T20 Worldcup 2022 and CWG 2022 check out the Schedule, Live Score and Medals Tally. Like us on Facebook or follow us on Twitter for more sports updates. You can also download the NDTV Cricket app for Android or iOS.