Kevin Sinclair's celebration came after he cleaned up Barbados Tridents all-rounder Mitchell Santner in the 16th over of the innings to break a crucial partnership. 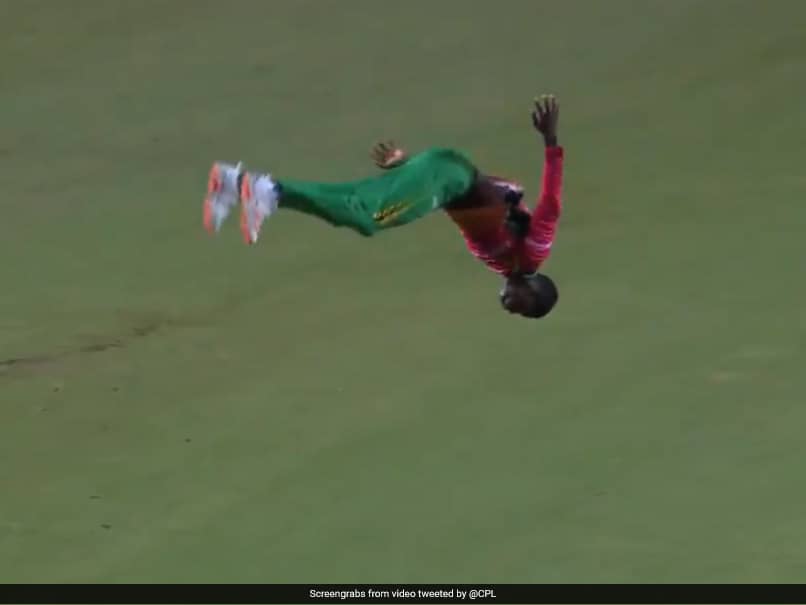 Kevin Sinclair performed his trademark somersault to celebration after taking a wicket in CPL 2020.© CPL/Twitter

Since the arrival of T20 cricket, the game has evolved drastically, with batsmen coming up with unique shots, fielders pulling off incredible catches and bowlers deceiving batsmen with their variations. Not just this, we also see bowlers coming up with their unique and trademark wicket celebrations -- some of which are rather dangerous. During a Caribbean Premier League (CPL) match between Guyana Amazon Warriors and defending champions Barbados Tridents, Kevin Sinclair decided to celebrate his wicket with his trademark somersault -- only this time he decided to raise the difficulty level and perform a double somersault. While the on-air commentator deemed it as "dangerous", other were simply astonished by the move, including the official social media handles of the league that wrote: "Double?? Treble?? Definitely Double Trouble in the Bubble!! What a celebration! #CPL20 #CricketPLayedLouder".

Sinclair's celebration came after he cleaned up Barbados Tridents all-rounder Mitchell Santner (18 runs) in the 16th over of the innings to break a crucial partnership. The defending champions put on a terrible show with the bat and managed a paltry 89/9 in the stipulated 20 overs.

For Guyana Amazon Warriors, Romario Shepherd and Imran Tahir were the pick of the bowlers, with both picking up three wickets apiece.

While Shepherd returned with figures 3/22 in his four overs, leg-spinner Tahir was the most economical bowler in the match as he conceded just 12 runs in his four-over spell.

With 90 runs to win, Warriors won the match by six wickets as they chased down the total in the 15th over, bringing Barbados Tridents' title defence to an end, who managed only two wins from nine matches and were second-last in the six-team points table with just four points.

Guyana Amazon Warriors, on the other hand, climbed to the second spot in the points table after the completion of all 10 league matches and booked a place in the semi-finals of the CPL 2020.