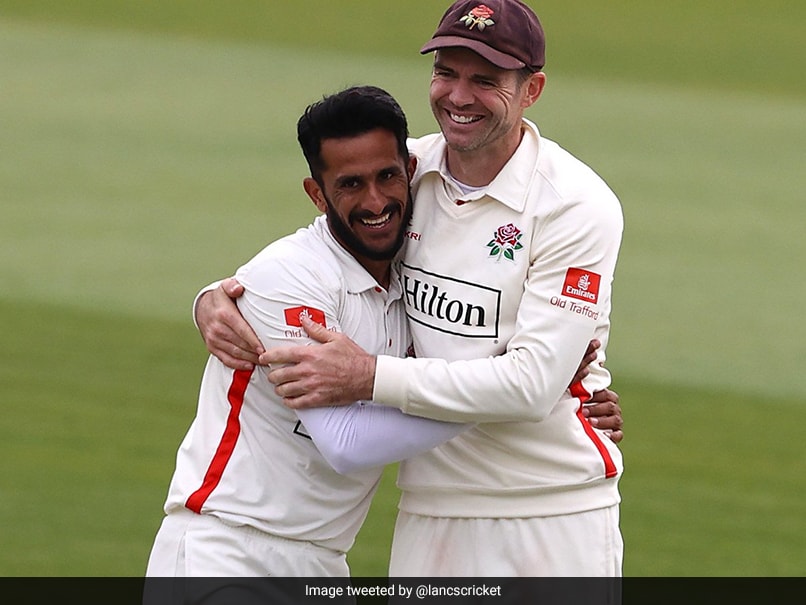 England pacer James Anderson was all praise for teammate Hasan Ali as the Pakistan fast bowler continues to impress with his performances for Lancashire in the ongoing County Championship. The 27-year-old is currently the joint-highest wicket-taker across the two divisions, having bagged 24 wickets in 8 innings with the help of two five-wicket hauls. The legendary England pacer, who has also picked eight wickets in two games so far, feels that bowling alongside Hasan has been a great learning curve for him

"Hasan Ali is an absolute legend, great guy and bowler. He's quite quick and he gives it everything, every ball. He's been amazing for Lancashire," Cricket Pakistan quoted Anderson as saying on BBC Radio 5 Live.

"He got Player of the Month for Lancashire in April and he's got skills. It's been great bowling with him. You can learn a lot from people you have not played with before when you see how they operate and see the different things they do," he said.

"Although he's been asking me a lot of questions about what I do, I've also been watching him and have learned some stuff from him," Anderson said.

The 39-year-old also spoke about Hasan's fiery celebration and described it in his own way.

"I like his celebration; I am amazed he can be so focused on bowling and all of a sudden he gets a wicket and he's bang straight into the routine," the veteran seamer said.

"He sort of bends his leg at the knees, his hands sort of touch the ground almost and then he pulls his hands back quickly, I can't really describe it. Whenever he has done in the past, he has done in front of big crowds, in county cricket, it's quite loud 'Hooo, heee, Hoooo,'" he added.

Hasan Ali Cricket
Get the latest updates on Fifa Worldcup 2022 and check out  Fifa World Cup Schedule, Stats and Live Cricket Score. Like us on Facebook or follow us on Twitter for more sports updates. You can also download the NDTV Cricket app for Android or iOS.