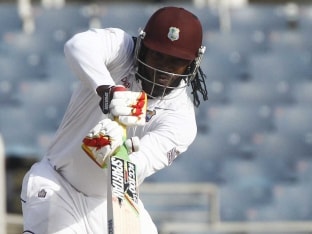 Chris Gayle has 15 centuries and 34 half-centuries at an average of 42.01 in 99 Tests. He also has the distinction of being one of only four batsmen -- Don Bradman, Brian Lara and Virender Sehwag -- to make two scores in excess of 300 in Tests.

The fun-loving man mountain can mix aggression and caution when the situation demands.

On Day 2 of the first Test between West Indies and New Zealand at Sabina Park in Kingston, Jamaica, the 6-foot 2-inch superstar Chris Gayle walked out to bat in his landmark 100th Test amidst a lot of fanfare and adulation. Gayle, who has been synonymous with a devastating approach to batting in the shortest format of the game in recent times, added a feather to his illustrious journey in white flannels which began 14 years ago.

Recent history suggests Gayle is nothing short of a Twenty20 legend, a benchmark against which a batsman's success and failure in the shortest format of the game can be measured. However, numbers suggest there is lot more to the man than just being an entertaining and free-scoring batter.

On and off the field, Gayle's Test career has seen a lot of highs and lows, including stand-offs with the West Indies Cricket Board. The Jamaican, who wears his attitude on his sleeve, has never hesitated to stand his ground, even if it meant speaking against the policies of the WICB.

Gayle has enjoyed his cricket. The fun-loving man mountain can mix aggression and caution when the situation demands. Grit and determination were in full display when Gayle batted for the first time after losing his Test captaincy to Darren Sammy in 2010. The left-handed Gayle slammed a 333 against Sri Lanka at Galle. For going past the 300-run mark in Tests on more than one occasion, Gayle joined an elite club that included Don Bradman, Brian Lara and Virender Sehwag.

Gayle's 'stand and deliver' approach and his penchant for sixes irrespective of the format may not put him in the good books of the purists but his impact cannot be discounted. Gayle may have the record of smashing the first ball of a Test match for a six but he has also played a handful of patient knocks that have saved the West Indies from the jaws of defeat. In 2008 at Napier, Gayle stood tall for close to nine and half hours to earn an improbable draw with a 396-ball knock of 197.

With just under 7,000 runs at an average of 42.01, 15 tons and 34 half-centuries, Gayle is just behind another flamboyant left-handed batsman, Sourav Ganguly, who has 7,212 runs to his name in 113 Tests at an average of 42.17 with 16 tons and 35 half-centuries. Gayle also has the opportunity to go past 7,000 runs quicker than the likes of Shivnarine Chanderpaul and Desmond Haynes.

Despite being on the wrong side of 30s, Gayle has already rubbished rumours of quitting Tests after the series against New Zealand. His troublesome back, the prime reason for a lackluster IPL 2014 season, may spoil his long-term plans but irrespective of when he bids farewell to the game, Gayle will be spoken of in the same breath as a Brian Lara or Garfield Sobers or Vivian Richards.

Comments
Topics mentioned in this article
Cricket Chris Gayle West Indies Cricket Team
Get the latest updates on Fifa Worldcup 2022 and check out  Fifa World Cup Schedule, Stats and Live Cricket Score. Like us on Facebook or follow us on Twitter for more sports updates. You can also download the NDTV Cricket app for Android or iOS.