Cheteshwar Pujara emulated a feat of one of the most celebrated Indian batsmen of all time in scoring a double-century for Sussex against Middlesex at Lord's. 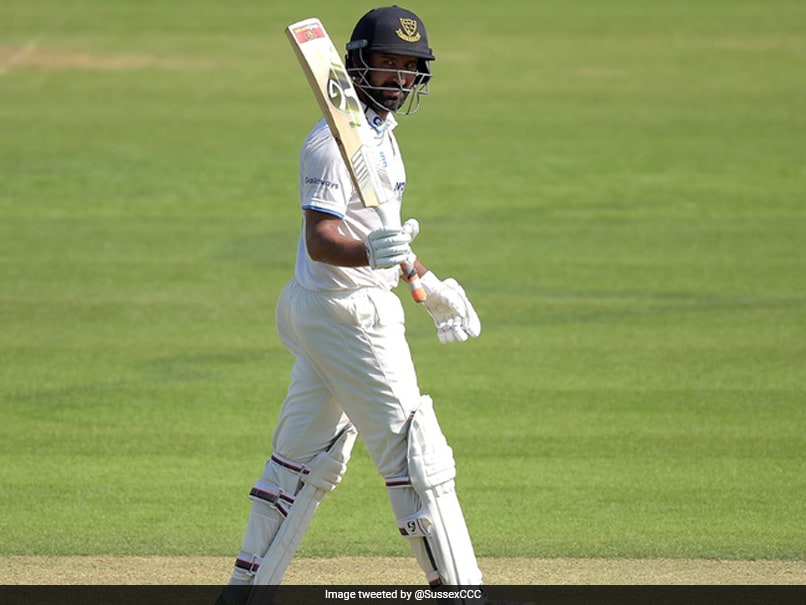 Cheteshwar Pujara celebrates his third double-century of the season.© Twitter

Cheteshwar Pujara emulated a feat of one of the most celebrated Indian batsmen of all time in scoring a double-century for Sussex against Middlesex at Lord's on Wednesday. The last Sussex batsman to post a double century at the Home of Cricket was India opener Pujara's compatriot, Colonel H. H. Shri Sir Ranjitsinhji Vibhaji II. KS Ranjitsinji, or 'Ranji' as he was popularly known, scored his double hundred in a match against the MCC 125 years ago.

Pujara's 231 was his third double century of the season.

An innings that started on Tuesday during London's hottest day on record saw the 34-year-old Pujara occupy the crease for nearly nine hours before he was last man out having guided the visitors to 523 -- a total that surpassed Sussex's previous highest score at Lord's of 522 set in 2005.

Ranji, the ruler of the Indian princely state of Nawanagar from 1907 to 1933, has long been regarded as one of cricket's most stylish batsmen and is widely credited with inventing the leg-glance.

Educated at Cambridge University, he played 15 Tests for England from 1896-1902, with India not becoming a Test nation in its own right until 1932 --just a year before Ranji's death aged 60.

Cheteshwar Pujara SUS Cricket
Get the latest updates on India vs South Africa and check out  Schedule, Results and Live Score. Like us on Facebook or follow us on Twitter for more sports updates. You can also download the NDTV Cricket app for Android or iOS.