During a County Championship match, Hampshire wicketkeeper Lewis McManus clipped the bails with his left hand while holding the ball in his right hand as he attempted a stumping dismissal. The batsman was given out after a strong appeal. 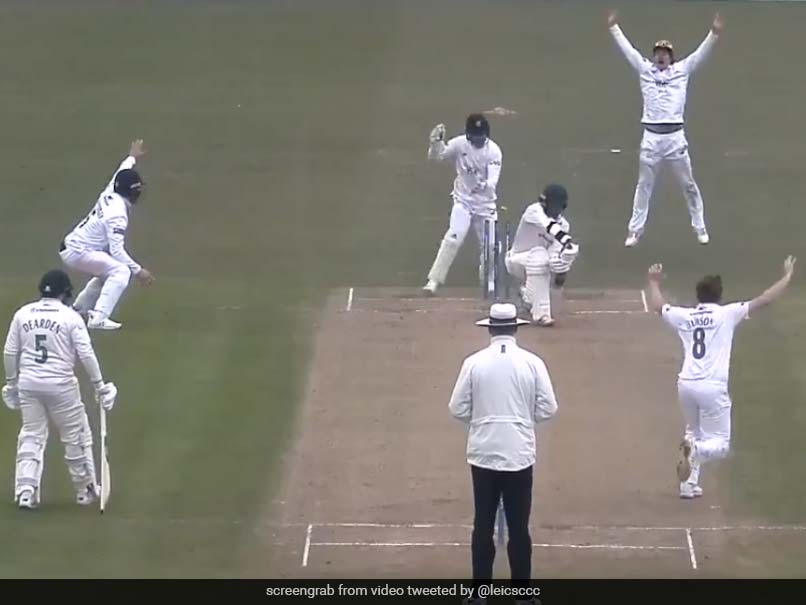 Leicestershire's Hasan Azad was given out stumped in a dubious fashion.© Twitter

A shocking stumping incident during a County Championshipmatch between Leicestershire and Hampshirehas once again sparked controversy. During Leicestershire's second innings, their opener Hasan Azad was given out stumped by the square leg umpire after Hampshire wicket-keeper Lewis McManus made an appeal. However, replays showed that McManus had clipped the bails with his left hand while holding the ball in his right hand. Reacting strongly to the incident, former England captain Michael Vaughan took to Twitter and described the act as "very poor". He also hoped that this would serve as lesson to the wicket-keeper as there is no chance of getting away with such incidents these days as all the county games are streamed online.

"Very poor this but I hope it's a lesson to him... All county games are now streamed so you can't get away with anything," Vaughan tweeted.

Very poor this but I hope it's a lesson to him ... All county games are now streamed so you can't get away with anything ... https://t.co/imXxtvKTKu

As per the rules, a batsman will be given out stumped only if the wicket-keeper has dislodged the bails with the same arm or hand he is holding the ball in. However, McManus persisted with his appeal and that lead to Azad's wicket who departed after fighting hard for his 18 off 77 balls.

Shortly after the incident, Leicestershire head coach Paul Nixon had a discussion with the match referee Stuart Cummings and expressed his disappointment.

Leicestershire released a statement on Sunday saying that they are in touch with the England and Wales Cricket Board (ECB) over the matter, who are taking it very seriously.

"Leicestershire CCC has been in contact with the England and Wales Cricket Board (ECB) already and are fully aware that the ECB is taking this matter very seriously," read Leicestershire's official statement.

Reacting to the incident, Leicestershire CEO Sean Jarvis described the act as "extremely disappointing" which has no place in the game as it brings the sport into disrepute..

"For everyone at Leicestershire, the behaviour displayed by Hampshire was extremely disappointing and has no place in the game," Jarvis was quoted as saying on Leicestershire's official website.

"I have written to the ECB following the completion of this fixture to express the concerns and disappointment of what happened. I hope we can resolve this matter quickly and move on from the incident," he added.

Following on in their second innings, Leicestershire folded for 305 runs and Hampshire, who had declared their first innings at 612/5, went on to win the match by an innings and 105 runs.