Kyle Abbott's match haul of 17/86 is the best ever for Hampshire and the best overall since 1956. 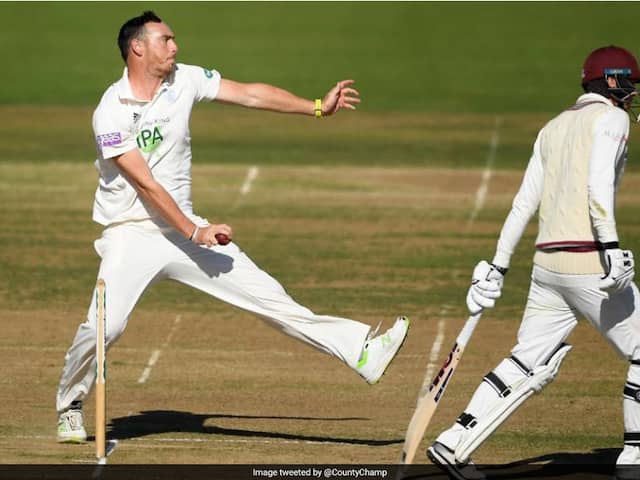 Former South Africa pacer Kyle Abbott who retired in 2017 to sign a Koplak deal with Hampshire returned with a match haul of 17/86 for his County Championship side against title-chasing Somerset. Kyle Abbott's bowling figures of 17/86 is the best ever for Hampshire and the best overall since England spinner Jim Laker took 19/90 against Australia in 1956. It is the the best bowling figures in first-class cricket in 63 years.

Abbott, 32, had taken 9/40 in the first innings and replicated his incredible fast bowling with a remarkable 8/46, the Championship's first 17-wicket haul for 80 years.

Somerset, who needed 281 to win, were skittled for just 144 in their second innings on Wednesday.

The 136-run defeat, Somerset's third loss of the season, means they will need to beat their title rivals Essex at Taunton next week if they are to win the Championship for the first time. Essex are on the brink of victory against Surrey.

Abbott featured in 11 Tests, 28 One-Day Internationals (ODIs) and 21 Twenty20 Internationals (T20Is) for South Africa. He made his debut for the Proteas in 2013. He had signed an initial four-year deal with Hampshire in 2017.

The right-hand pacer has played 113 first-class matches. He has picked up 439 wickets and has 30 five-wicket hauls to his name.

Kyle Abbott Cricket
Get the latest Cricket news, check out the India cricket schedule, Cricket live score . Like us on Facebook or follow us on Twitter for more sports updates. You can also download the NDTV Cricket app for Android or iOS.