Both Dale Steyn and Lungi Ngidi shared four wickets between them while Andile Phehlukwayo ended the match with figures of 3/33. 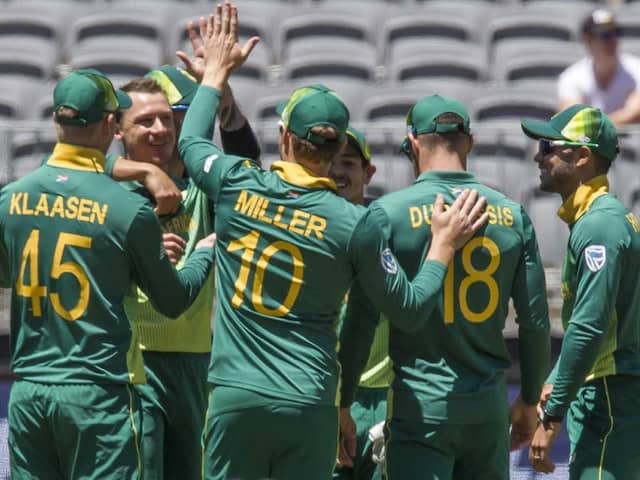 Dale Steyn ended the match with figures of 2/18 from seven overs.© AFP

A dominant South African team brushed aside a beleaguered Australian side by six wickets in the first One-day international (ODI) in Perth on Sunday. Led by Dale Steyn, the South African bowlers ran through the Australian batting order as the hosts were bowled out for a paltry 152 in 38.1 overs. South African openers Quinton de Kock (47) and Reeza Hendricks (44) gave the hosts a solid start as they romped to a victory with 124 balls to spare. New-Look Australia, captained by Aaron Finch, came into the clash having lost 16 of their last 18 ODIs.

Australia's batting line-up, without banned Steve Smith and David Warner, were exposed once again in a stadium full of empty seats.

For Australia, Nathan Coulter-Nile (34) and Alex Carey (33) were the only ones to offer any resistance. Veteran Steyn took 2/18 off seven overs while Andile Phehlukwayo picked up 3/33 off six overs.

Australia were buoyant ahead of the game with injured fast bowlers Mitchell Starc and Pat Cummins returning to spearhead the attack alongside Josh Hazlewood.

But they failed to emulate their South African counterparts.

Captain Finch bizarrely opted to open the bowling with Coulter-Nile alongside Hazlewood instead of Starc. He was smashed for 16 in his first over before being removed.

De Kock and Hendricks raced to a 94-run partnership before Coulter-Nile made amends on his return, having de Kock caught at mid-off going for another big hit.

South Africa won the toss and after opting for a four-pronged pace attack on a fast pitch chose to bowl, quickly putting Australia under pressure with Steyn getting two early breakthroughs.

Travis Head got a thick edge to de Kock off the veteran for just one and then D'Arcy Short, in the side for Shaun Marsh who needs minor surgery on an abscess, followed him back to the pavilion for a duck two balls later.

Finch, who can be explosive when in full flight, totally misjudged the bounce from a Lungi Ngidi delivery and was out lbw soon after for five.

He mistakenly opted not to review with Australia floundering at 8/3 as replays revealed the ball would have gone over the stumps.

The first four of the innings, from Chris Lynn, didn't come until the 12th over, and he was caught behind for 15 on review not long after despite the umpire initially ruling him not out.

Carey kept the scoreboard slowly ticking over but he fell attempting to scoop an Imran Tahir ball over the head of de Kock.

Some late fireworks from Coulter-Nile took Australia past 150, but it was never going to be enough.

Aaron Finch Cricket
Get the latest updates on IPL 2020, check out the IPL Schedule for 2020 and Indian Premier League (IPL) Cricket live score . Like us on Facebook or follow us on Twitter for more sports updates. You can also download the NDTV Cricket app for Android or iOS.