Aaron Finch takes over from Tim Paine who averaged just 7.2 in Australia's 0-5 ODI series rout by England in June. 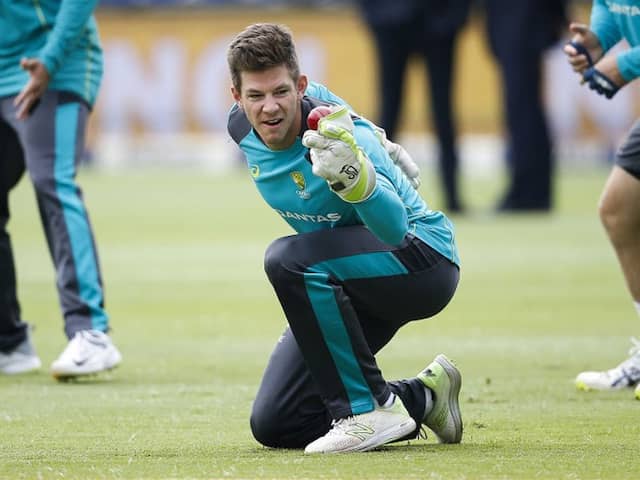 Tim Paine and his deputy Mitchell Marsh were both axed from the Australia ODI squad.© AFP

Aaron Finch was named Australia's new one-day captain on Saturday ahead of their upcoming series against South Africa, with Test skipper Tim Paine and his deputy Mitch Marsh axed. The explosive batsman is already in charge of the Twenty20 team and takes over from Paine who averaged just 7.2 in Australia's 5-0 ODI series rout by England in June. Spin veteran Nathan Lyon was another notable omission, although Shaun Marsh kept his place despite a dire recent Test series against Pakistan in the United Arab Emirates.

Alex Carey and Josh Hazlewood were appointed joint vice-captains in a 14-man squad that sees the return of fast bowlers Mitchell Starc and Pat Cummins.

"It's very exciting. I'm very humbled, very honoured to lead the side and lead Australia," Finch said, welcoming having a bowler as his deputy.

"I think it's really important to have the voice of the bowlers there as well... a lot of the time batters are in leadership roles and bowlers are neglected in terms of that and it's almost an 'us versus them' at times."

National selector Trevor Hohns said the leadership decisions were based on presentations the players made, their vision for Australian cricket and their actions on and off the field.

"We expect Aaron, Josh and Alex to lead the side through a big Australian summer... they'll also be driving our standards and values as we prepare our defence of the World Cup, which is only seven months away," he said.

"We believe the squad we have selected will give us a great opportunity to not only be competitive at home this summer, but it also allows us to start to build continuity leading into next year's tournament."

Finch, Marsh, Travis Head and Glenn Maxwell spearhead the batting while big-hitting Chris Lynn has been recalled, with Carey taking over the wicketkeeping duties from Paine.

"Alex Carey will pull on the gloves full-time to allow Tim Paine to focus purely on captaining the Test team, which includes preparing for next year's Ashes," said Hohns in explaining why Paine was dropped.

"Alex provides us with another strong batting option, as he displayed in last year's Big Bash, and he's a wonderful young leader to have around the group and out in the field."

Two spin bowlers were included in the absence of Lyon -- Ashton Agar and Adam Zampa.

Despite Lyon and Mitch Marsh being dropped, Hohns suggested the door was not shut for their return leading into the World Cup next year.

"We have made the decision to manage Mitch Marsh and Nathan Lyon carefully to ensure they are in the best condition possible to put their hand up for selection either later in the summer or for the World Cup next year," he said.

"No doubt with a big summer program ahead opportunities may well present themselves for Andrew (Tye), Mitch and Nathan, as well as others not included in this squad."