The fans gathered inside the Chinnaswamy Stadium started the chants of 'RCB, RCB' as Rajat Patidar sealed MP's first Ranji title on Sunday 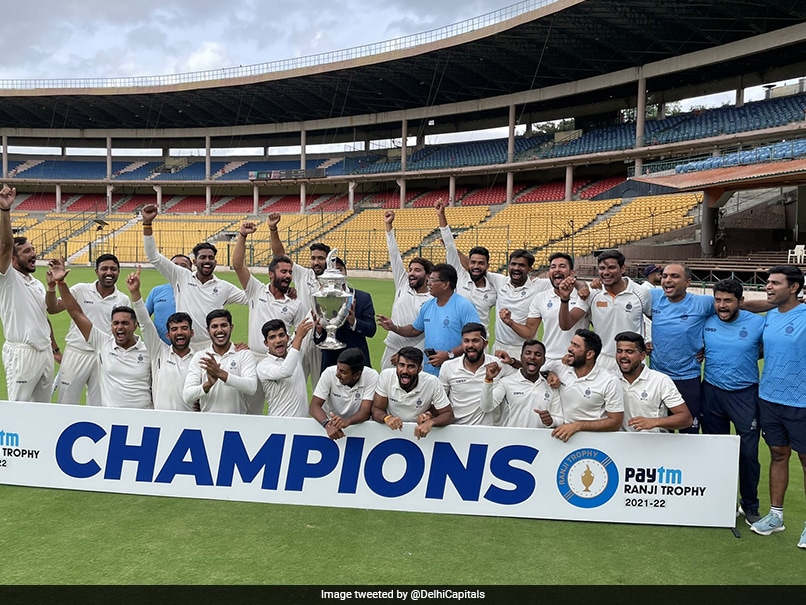 Coach Chandrakant Pandit looked emotional and was later lifted up by the players.© Twitter

Madhya Pradesh on Sunday lifted their first Ranji Trophy title after beating the 41-time champions Mumbai in the final at the M Chinnaswamy Stadium in Bengaluru. It was an all-round performance from Madhya Pradesh at the same venue where they had lost the final in 1999 to Karnataka. Rajat Patidar, who played for Royal Challengers Bangalore (RCB) during IPL 2022, scored the winning runs for his team, and fans gathered inside the Chinnaswamy Stadium started the chants of 'RCB, RCB' as he sealed MP's first Ranji title on Sunday.

The video was shared by BCCI Domestic on their official Twitter handle.

Madhya Pradesh players were seen storming the pitch and jumping on the two batters at the crease. Coach Chandrakant Pandit looked emotional and was later lifted up by the team on their shoulders.

In the final, MP had to stamp their authority in their first innings after Mumbai had won the toss and elected to bat.

Sarfaraz Khan's 134-run knock and Yashasvi Jaiswal's 78 had propelled Mumbai to a strong total of 374 runs in the first innings.

Mumbai had made a strong start in the second innings but Kumar Kartikeya's four-wicket haul saw them being bowled out for 269.

In the end, MP chased down the total of 108 runs easily, with Patidar and skipper Aditya Shrivastava finishing unbeaten on 30 and 1, respectively.

Royal Challengers Bangalore
Get the latest updates on Fifa Worldcup 2022 and check out  Fifa World Cup Schedule, Stats and Live Cricket Score. Like us on Facebook or follow us on Twitter for more sports updates. You can also download the NDTV Cricket app for Android or iOS.