Ben Foakes stumping of Ireland's Andy Balbirnie has left the cricketing world divided with some even claiming that it was worse than 'mankading'. 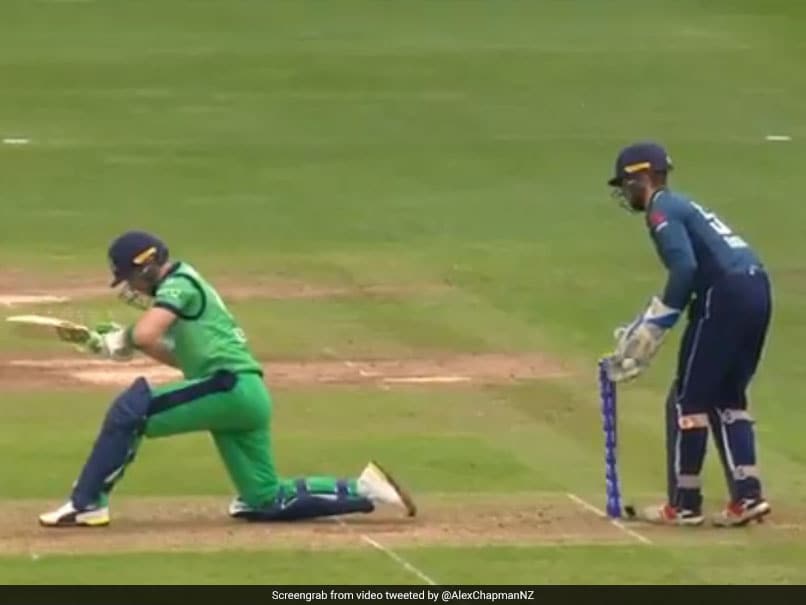 Ben Foakes was the saviour for England in the one-off ODI against Ireland in Dublin on Friday. However, before his heroics with the bat Ben Foakes was caught up in a bizarre controversy that has left the cricketing world divided. Ben Foakes sent Ireland batsman Andy Balbirnie packing with a clever bit of stumping but some fans claimed that it was against the spirit of the game and worse than mankading. The incident took place in the 25th over of Ireland's innings. Ben Foakes, holding onto the ball, waited patiently for the Balbirnie to over-balance after missing a sweep shot off Joe Denly and then whipped off the bails to complete a stumping.

Here is a clip of the stumping that has kicked up a massive social media storm:

Foakes showing with the bat and gloves what a smart cricketer he is pic.twitter.com/Cd03GalOVD

After a lengthy review, the Irish batsman was deemed to have lifted his back foot and was given his marching orders.

While many hailed Ben Foakes for being clever, others were not as pleased with the England debutant with the likes of renowned commentator Alan Wilkins going on to call the stumping against the "Spirit of Cricket".

Spirit of cricket ? @Eoin16 should have withdrawn the appeal. Youth cricketers will be mankading and delay stumping all summer. Embarrassing !

I can watch Ben Foakes stumping all year long. What a beauty. #bbccricket

That Ben Foakes stumping was a thing of beauty. #bbccricket

How on earth are people comparing Ben Foakes stumping to mankadding? Here's a tip, dont lift your back foot when you have someone as good as Foakes behind the stumps @WK_Union #keepersunion

If the @ICC wishes to maintain its "Spirit of Cricket" as part of the modern game, then the Ben Foakes 'stumping' in Malahide today should not be endorsed as "within the Spirit of the Game." #IREvENG @ECB_cricket

Totally agree.
In Ashwin's case, the batsman was trying to gain advantage.
So, this stumping is worse than mankading in terms of 'Spirit of the Game'
Where are all those Eng players who degraded Ashwin for mankad??

Ben Foakes stumping was a disgrace - much bigger than Ashwin's actions. Here there was a willing actor waiting for batsman to lift his leg much after the actual transaction of the ball got over. Reminds me of Alec stewart's antics. Surprised with the pindrop silence from pundits

Heres stumping pics Poms saying its smart glove work not against spirit of the game this time .why this double standards for ur own country players. I hope @jimmy9 will shred ben foakes pic to show his displeasure and @Colly622 will tweet about mother cricket and karma#ENGvIRE pic.twitter.com/D3j4tGstW7

I have no problem with what #BenFoakes did out there in #IREvENG. But it is very necessary to call out the hypocrisy of many #England cricket fans & torchbearers of #SpiritofCricket who went all guns blazing against #Ashwin, with some of them even praising Ben for it.

"I can't believe what I'm seeing!! Terrible example to set for young kids coming through. In time, I think Foakes will regret that." #spotthedifference pic.twitter.com/zHHJCPqUpq

And while Ben Foakes' stumping might have rubbed a few in the wrong way, his batting ticked all the boxes.

Foakes' unbeaten 61 on his debut helped England recover from a top-order collapse to beat Ireland by four wickets.

England, the world's top-ranked side in ODI cricket and the hosts of the 50-over World Cup 2019 starting later this month, collapsed to 66 for five chasing a modest 199 for victory.

They were still in trouble in a match at Malahide reduced to 45 overs per side by a wet outfield when teenage debutant left-arm quick Josh Little took his fourth wicket.

England were now 101 for six against an Ireland side who have not qualified for the 2019 World Cup.

But Ben Foakes and Surrey teammate Tom Curran (47 not out) shared an unbeaten stand of 98 as England won with 18 balls to spare.

Andy Balbirnie Ireland vs England, One-off ODI Cricket
Get the latest updates on IPL 2021, check out the IPL 2021 Schedule and Indian Premier League Live Score . Like us on Facebook or follow us on Twitter for more sports updates. You can also download the NDTV Cricket app for Android or iOS.