England collapsed to 66 for five chasing a modest 199 for victory before Ben Foakes along with Tom Curran came to the rescue. 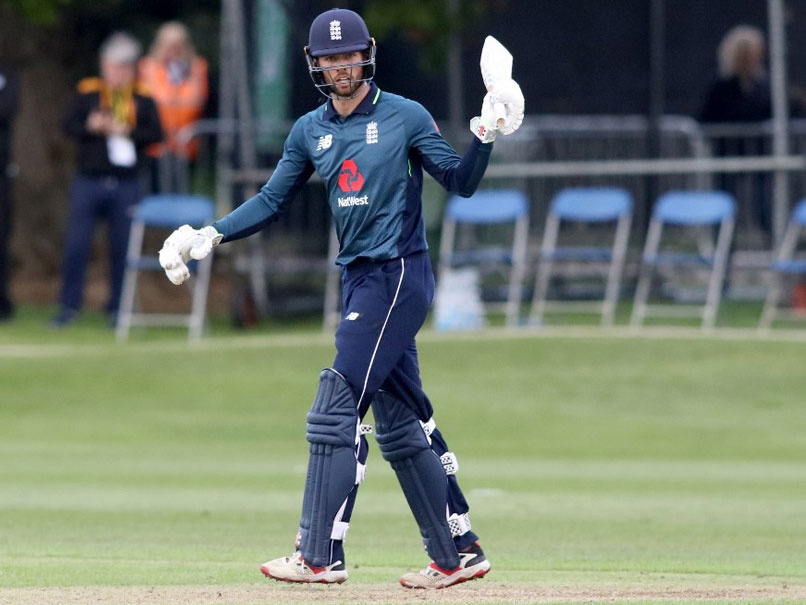 Ben Foakes struck an unbeaten 61 as England beat Ireland by 4 wickets in the one-off ODI in Dublin.© AFP

Ben Foakes' unbeaten 61 on his debut helped England recover from a top-order collapse to beat Ireland by four wickets in a lone one-day international in Dublin on Friday. England, the world's top-ranked side in ODI cricket and the hosts of the 50-over World Cup 2019 starting later this month, collapsed to 66 for five chasing a modest 199 for victory. They were still in trouble in a match at Malahide reduced to 45 overs per side by a wet outfield when teenage debutant left-arm quick Josh Little took his fourth wicket.

England were now 101 for six against an Ireland side who have not qualified for the 2019 World Cup.

But wicket-keeper Foakes and Surrey team-mate Tom Curran (47 not out) shared an unbroken stand of 98 as England won with 18 balls to spare.

Victory in their opening match of the season saw England avoid the embarrassment of a fresh defeat by a side controversially excluded from an upcoming World Cup 2019 now reduced to 10 teams following their shock loss away to Scotland last year.

'Found a way to win'

"I thought the bowlers did a great job and three or four of us batted really poorly," England captain Eoin Morgan told Sky Sports.

"But I thought Ben Foakes was absolutely outstanding on his debut.

"His and Tom Curran's partnership really did get us over the line.

"And I think that's brilliant, we went to Scotland last year and played brilliantly but got beaten. Today we found a way to win which is nice."

It was another composed display by the 26-year-old, who made 107 on Test debut, away to Sri Lanka in November.

Foakes, however, survived a close lbw appeal from veteran Middlesex paceman Tim Murtagh on 37, with Ireland opting against a review that might have gone their way.

Ireland captain William Porterfield, while disappointed by his side's total, was heartened by the form of Little, one of three debutants in each side.

"Josh Little, with the potential he has, to just settle in there and not look out of place is all credit to him," he said.

England were without two experienced top-order batsmen in the injured Jason Roy and the axed Alex Hales, sent into international exile after reportedly failing a second test for recreational drug use.

When Vince (18) pulled Little to mid-wicket, England were 34 for one.

Little struck again when he dismissed Eoin Morgan for a duck after the Dublin-born batsman could only fend a superb bouncer to Gary Wilson.

Wicket-keeper Wilson, in his 100th ODI, then held an even better catch -- a diving one-handed grab high to his left -- as Malan (24) slashed at Little, who finished with fine figures of four for 45.

Earlier, Liam Plunkett took four for 35 in an Ireland innings where paceman Jofra Archer marked his England debut with a wicket.

Barbados-born Archer, whose first ball in international cricket was hit for four by Paul Stirling, produced a 90 mph yorker to bowl Mark Adair.

"Jof started really well, it's always difficult to tell on debut, they are always a bit of a write off, get yourself into international cricket and see how you go," said Morgan.

William Porterfield Ireland vs England, One-off ODI Cricket
Get the latest updates on ICC T20 Worldcup 2022, check out the Schedule and Live Score. Like us on Facebook or follow us on Twitter for more sports updates. You can also download the NDTV Cricket app for Android or iOS.