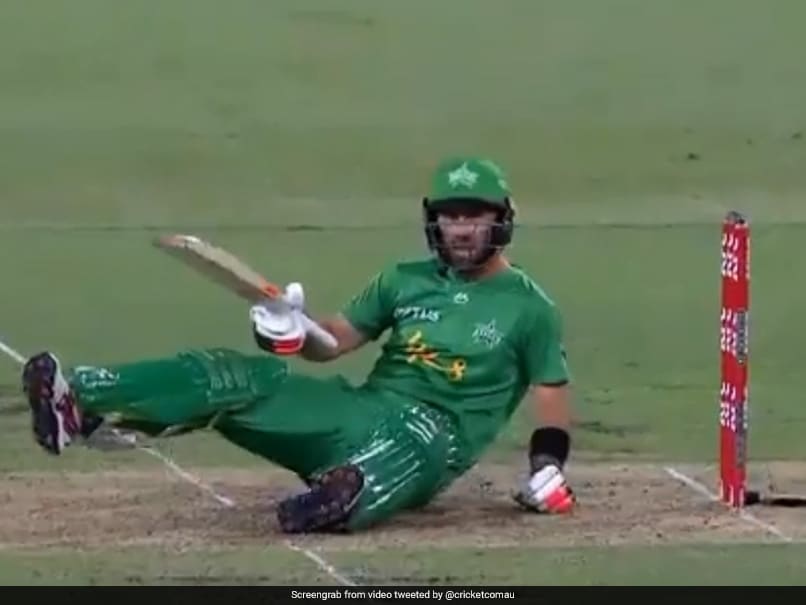 Glenn Maxwell was floored and left shell-shocked on Monday after a 141.5 kph beamer bowled by Sydney Sixers' Ben Dwarshuis nearly took his head off. Melbourne Stars captain Maxwell came into bat after Nic Maddinson's dismissal and two balls into his innings, was seen taking evasive action to avoid being hit by the "nasty delivery" from the Sydney Sixers pacer. TheAustralian all-rounder found himself on the deck and looked around in shock even as the Sydney Sixers players came up to check on him.

Maxwell wanted to sway away from the beamer, but the ball clipped the inner edge and hit him around the shoulder. Dwarshuis was quick to apologise. Cricket Australia and Big Bash League's official Twitter handles posted the video of the incident.

To his credit, Maxwell got up and smacked the next delivery for a four to get off the mark.

However, the Melbourne Stars skipper couldn't get his team over the line, sent packing by Tom Curran for 12 in the rain-curtailed BBL 2019 game at the Sydney Cricket Ground (SCG).

Powered by a 31-ball 72 from captain Moises Henriques, Sydney Sixers posted an imposing 143 for four after rain had reduced the match to a 14-over-a-side affair.

Nic Maddinson's sluggish knock of 16 off 18 balls in the chase, came back to haunt the Melbourne Stars. Marcus Stoinis once again showcased his powerful hitting with a 37-ball 62, which included three fours and four sixes.

But Stoinis got no support from his teammates barring a 10-ball 21 cameo from opening partner Hilton Cartwright. In the end, the Stars could only manage 125 for five in their 14 overs as the Sixers won the match by 21 runs.

This was only the second loss for Melbourne Stars this season and despite the loss they continue to top the BBL points table, five points ahead of second-placed Sydney Sixers.

Moises Henriques Cricket
Get the latest updates on ICC T20 Worldcup 2022 and CWG 2022 check out the Schedule, Live Score and Medals Tally. Like us on Facebook or follow us on Twitter for more sports updates. You can also download the NDTV Cricket app for Android or iOS.