Another batter replying to a send-off given to his teammate is not a common sight in the gentleman's game. Chris Williams did exactly that in a European Cricket League match. 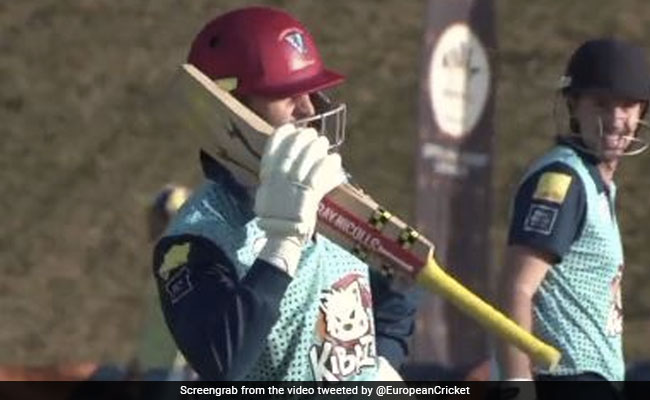 Send-offs are not unusual on a cricket field, that includes a bowler taking off his shoes and symbolically using it like a phone. A batters' reply to the same bowler after getting the better of him in the next outing is also something that has happened in the past. But another batter replying to a send-off given to his teammate is not a common sight in the gentleman's game. Chris Williams did exactly that in a European Cricket League match. The Tunbridge Wells captain, after hitting a couple of sixes, decided to copy Dreux bowler Wahid Abdul's celebration which he had used after cleaning up William's teammate Marcus O'Riordan in the previous over. The bowler who was at the receiving end of Williams' sixes and also the celebration was however K Ahmadzai.

It all started when Wahid Abdul bowled a perfect yorker in the 8th over of Tunbridge Wells innings to clean up O'Riordan, who had hit back-to-back boundaries in his first two balls in the same over. Abdul took off his shoe and used to like a phone to celebrate his wicket. This is a common mode of celebration used previously by players like Dave Mohammad and Tabraiz Shamsi after picking up a wicket.

In the next over, Williams, who was at the non-striker's end when O'Riordan received the send-off from Abdul, hit Ahmadzai for a six and used his bat to make a symbolic gesture of using a phone. Williams repeated the same act after hitting another six off Ahmadzai in the next delivery.

Tunbridge Wells also ended up winning the contest by 50 runs. Batting first, they put together a mammoth 141 for 3 in their allotted 10 overs powered by blistering fifties from captain Chirs Williams (56) and Alex Williams (58).

In reply, Dreux were bowled out for 91 in just 7.2 overs as Joe McCaffrey picked up three wickets for 9 runs in his 1.2 overs.

Comments
Topics mentioned in this article
Cricket Social
Get the latest updates on ICC T20 Worldcup 2022 and CWG 2022 check out the Schedule, Live Score and Medals Tally. Like us on Facebook or follow us on Twitter for more sports updates. You can also download the NDTV Cricket app for Android or iOS.