Tim Paine was made captain for the rest of the third Test at Newlands after regular captain Steve Smith and vice-captain David Warner stepped down. 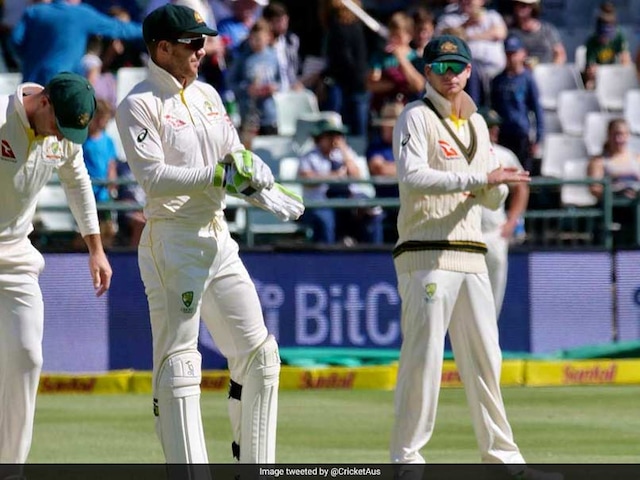 South African crowd on Sunday jeered Australia when stand-in captain Tim Paine led the team out at the start of play on Day 4 in the wake of a ball-tampering scandal. Paine was made captain for the rest of the third Test at Newlands after regular captain Steve Smith and vice-captain David Warner stepped down following Saturday's revelations. Although all tickets for the day had been sold, the ground was only about a third full at the start of play. Some boos could be heard but a loud public address system was played until the Australians had taken their places on the field.

Former Australia captain Allan Border said in SuperSport television's build-up to the day's play that he was "angry and embarrassed" by Saturday's events.

"I am disappointed in Steve Smith as captain to take that decision to go out and try to do this."

He said the actions were "un-Australian" and opened the team up to criticism from around the world.

Smith had admitted following Saturday's third day action that he had masterminded an attempt by Cameron Bancroft to alter the condition of the ball in the outfield using a yellow object.

"The leadership group knew about it," Smith said. "I'm not proud of what happened."

Former South African captain Graeme Smith said the current team was unlike previous Australian outfits he had encountered, pointing to a move from before the tour to try to get South African fast bowler Kagiso Rabada banned.

"That's not Australia for me," said Smith, who criticised what he described as "whingeing" about the behaviour of South African spectators and Steve Smith's anger that Rabada had been reprieved despite being banned after reaching a demerit point threshold.

Shaun Pollock, another former South African captain, said the Australians would have to face the consequences of their actions.

"It was pre-meditated and they've been caught. They have been shown to cheat," he said.

Comments
Topics mentioned in this article
Steven Smith David Warner Tim Paine Australia Cricket Team South Africa Cricket Team Cricket
Get the latest Cricket news, check out the India cricket schedule, Cricket live score . Like us on Facebook or follow us on Twitter for more sports updates. You can also download the NDTV Cricket app for Android or iOS.