Dale Steyn has returned to Australia two years after he was ruled out of the first Test at the WACA with a shoulder injury. 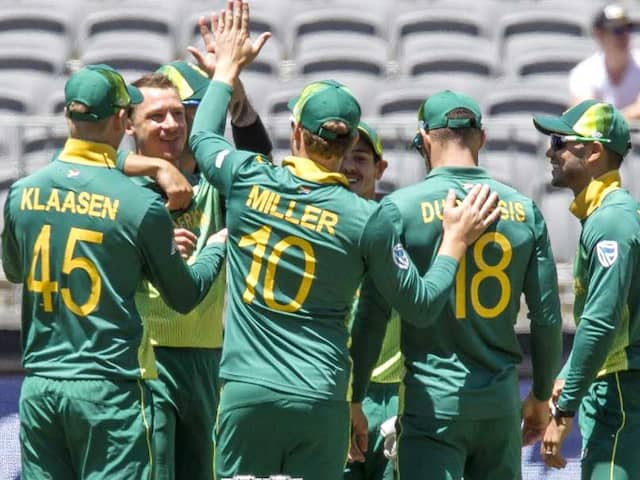 Dale Steyn returned to international cricket with a bang as he struck twice in three balls.© AFP

South Africa pacer Dale Steyn returned to international cricket with a bang as he struck twice in three balls to put the visitors on top during the ongoing first One-Day International (ODI) against Australia in Perth on Sunday. Faf Du Plessis won the toss and opted to bowl. The spearhead of a fearsome South African attack featuring youngsters Kagiso Rabada and Lungi Ngidi, Steyn delivered in his first spell. The 35-year-old looked in top form as he got rid of Travis Head and D'Arcy Short in his second over. The wicket of Short stands out as Faf du Plessis pulled off a stunner at the second slip to send the left-hander packing for a duck.

Steyn pitched the ball up to Short and the batsman came hard at it as he looked to play it through covers, but only managed to find a thick edge and a flying Faf did the rest.

Steyn has returned to Australia two years after he was ruled out of the first Test at the WACA Ground with a shoulder injury.

Extensive rehab repaired the shoulder, but more injuries followed. A heel issue forced him out of the dramatic Test series against Australia earlier this year.

But having played through nearly a full season of County cricket in England this winter and returned to the international arena in both Test and ODI cricket in 2018, the right-armer is back bowling as fast as ever.

As far as the match is concerned, the two sides are meeting for the first time since the Test series in South Africa this year boiled over with Australian players attempting to alter the ball with sandpaper.

Despite Australia being without banned Steve Smith and David Warner and their poor ODI form, Du Plessis said his team won't be taking the home side lightly.